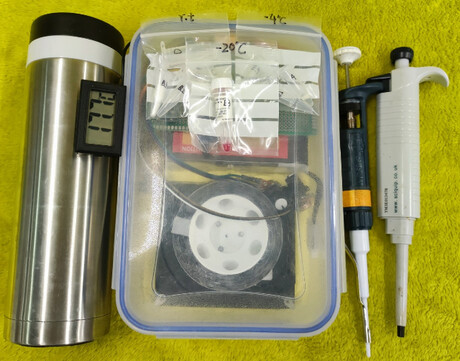 Scientists from Queen Mary University of London have created a simple COVID-19 testing lab that fits into a backpack, providing a cheap and effective solution for low-income, remote or resource-poor areas. Costing just US$51 to make, the compact kit could offer a testing solution for areas with little access to well-equipped labs or trained personnel to process samples.

Described in the journal PLOS ONE, the standalone system includes a centrifuge, named CentriDrive, that is easily constructed from recycled computer hard drives and can be powered by a rechargeable battery or hooked up to an automobile battery. It can process six samples in 90 minutes using a technique known as reverse transcription loop-mediated isothermal amplification (RT-LAMP), which has similar sensitivity to PCR testing.

The LAMP test is a widely accepted alternative to the PCR test, but unlike the PCR test it does not require temperature cycling — only a single high temperature to amplify any potential virus RNA. This allows the test to be performed with only minimal equipment and reagents. Because the LAMP test uses saliva samples, it also avoids the need for invasive, uncomfortable nasal swabs.

The high costs of commercially available LAMP tests (around US$118), as well as the expensive lab equipment required to run them, means that current commercial approaches aren’t suitable for remote locations or in-home testing. Using the Queen Mary method, the cost of the chemicals needed to process each saliva sample is just US$3.50.

The researchers evaluated the reliability of the lab-in-a-backpack system by using it to test saliva samples combined with known amounts of SARS-CoV-2 RNA. They found the system to be effective and sensitive, capable of detecting as few as four viral RNA copies per microlitre of saliva — a lower level than is actually found in infected people.

The researchers hope the lab-in-a-backpack could help mitigate the impact of the COVID-19 pandemic by enabling an increased amount of self-testing at home, testing in the field, and mobile testing in a wider variety of cultures and settings, such as refugee camps and disaster zones. In addition, Queen Mary Professor Stoyan Smoukov believes the CentriDrive kit could eventually be used to perform “a large array of routine blood and urine tests, providing a centrifuge away from central hospital facilities”.

According to the researchers, the next steps will include making the kit instructions even more understandable so that people can use them regardless of their experience or language, as well as validating the kit with real patient samples.

“Upon validation,” the researchers said, “we are confident it should be possible to develop commercial tests based on the kits for under £10.”