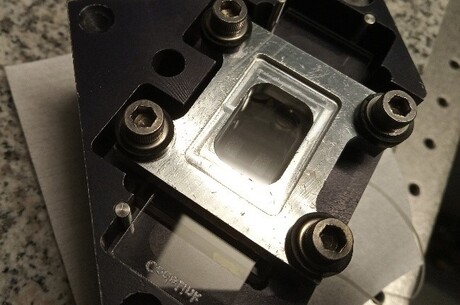 Biochips (microarrays) are analytical tools that allow thousands of individual detections to be performed simultaneously in a small amount of sample material. Researchers from the University of Vienna have now developed a method by which commercially available DNA chips can be quickly and easily converted into RNA chips, which are otherwise much more difficult to produce. Such RNA microarrays help to elucidate the still unknown functions of RNA molecules in cells — an important prerequisite for advancing the diagnosis and treatment of diseases such as cancer.

Commercially available DNA microarrays are used by default to perform high-throughput genome analyses; for example, they are regularly used in the diagnosis of various hereditary diseases and cancer. They consist of a solid carrier, such as a small glass plate, on which a large number of different DNA molecules are bound. On the one hand, for each of these variants their exact position on the surface is known. On the other hand, they can be extremely densely packed, so that hundreds of thousands of different DNA strands can fit on the surface of a thumbnail.

The commercial production of DNA chips is based on the stepwise concatenation of individual DNA building blocks. Although this production method has long been established, it can only be transferred to the synthesis of RNA microarrays to a limited extent. This is because RNA molecules are significantly more unstable. In addition, the individual RNA building blocks bind to each other with less efficiency than their DNA equivalents when building the RNA strand. This effect limits the possible length of the RNA strand.

As revealed by the research team in the journal Nature Communications, the DNA sequences available on commercial chips can be rewritten into their complementary RNA strands in a length-independent manner through the targeted use of enzymes. Further enzymes then selectively degrade the DNA templates, resulting in an RNA chip.

“The outstanding thing is that the fabrication method we developed is based solely on commercially available materials and reagents,” said Schaudy, who served as first author on the study. “Specialised laboratory equipment is unnecessary. This now enables researchers from a wide range of disciplines to produce themselves RNA microarrays that are precisely tailored to their scientific questions.”

Team leader Mark Somoza added, “With this fast and easy-to-perform methodology, we have also created an important basis for further potential applications. For example, RNA technology could equally help to investigate the influence of food compounds on cellular processes and thus human health.”

Visualising mRNA molecules in the brains of live mice

A new imaging technique gives scientists a window into RNA synthesis in the brain of a mouse...

Asthmatics found to have a distinct metabolite profile

Severe asthmatics have a distinct biochemical (metabolite) profile detectable in their urine...

Researchers collaborated to develop a blood test to identify patients who require chemo after...