Should we put all our eggs in one basket when we develop a vaccine? 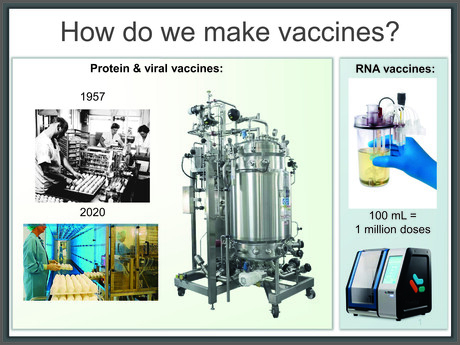 A new age of vaccine development is upon us, and biotech companies are going into RNA overdrive.

What is all the activity about? How is it different from the traditional method we have successfully used since the 1950s? Should we apply the old adage “if it ain’t broke, don’t fix it”?

Vaccine development is fundamentally about agility, preparedness, efficacy, distribution, cost and safety. Viral vector-based vaccines may tick the efficacy box (though is a two-shot vaccine efficacious?); however, often the most efficacious are the least safe vaccine platforms given the potential for replication and they need massive infrastructure for production (one egg — one vaccine dose). On the other end of the efficacy spectrum are the non-replicating vaccines, such as non-replicating virus vectors, virus-like particle subunit vaccines and nucleic acid vaccines.

If you explore nucleic acid vaccines, they can be categorised into three main groups: unmodified, base modified mRNA and self-amplifying mRNA (SAM). Of these, the most disruptive technology with the potential to tick all the boxes is SAM — where an alphavirus RNA is hijacked, it is produced enzymatically and structural proteins are replaced with a gene encoding for an antigenic protein. Incredibly versatile, the antibody response can be transformed with diverse antigenic genes consequentially ideal for preparedness. Safety is enhanced given the non-replicating nature of the SAM, infrastructure is minimised and distribution is simplified.

SAMs are not without their challenges though; they have to cross the cell membrane, present to the ribosome, dodge immune responses and, to fulfill the brief, they also need to be scalable, translatable and repeatable. A promising solution is the Precision Nanosystems Inc (PNI) NanoAssemblr platform that enables the rapid, reproducible and scalable manufacture of next-generation nanoparticle formulations such as lipid nanoparticles and liposomes to encapsulate a payload such as a SAM. Collaborative research across the globe has shown high encapsulation of the payload and enviable transfection resulting in encouraging efficacy, such as the findings of Dr Anna Blakney of Imperial College London (http://go.precisionnanosystems.com/m000Oh2040fQ1bncZCu0MG0).

What about the cost? Often reported as a per-dose cost, it has been suggested a scaled-up SAM vaccine would be extraordinarily low — anything from 50c to around AU$1 to manufacture, depending largely on the volume produced and the amazingly low dose required to elicit the antibody response. In stark contrast to this are cultured vaccines, be it in eggs or mammalian cells. A purpose-built facility in Holly Springs, North Carolina, which cost around US$1bn to build and was recently expanded, was designed to produce up to 200 million influenza vaccine doses within six months of a declared epidemic. Interestingly, a PNI GMP installation can be dropped into existing infrastructure for a fraction of this cost.

Bringing this home to Australia and the desire to have a home-grown solution, a cultured facility on a per-capita basis may be unrealisable notwithstanding the general lack of agility. Does Australia have expertise in RNA technology? Absolutely — to cite one example, look to the exceptional research at Monash University, where Professor Colin Pouton’s team has employed an mRNA vaccination approach.

Australia must continue to invest in our world-class research, understanding the financial impost of large-scale manufacture given our relatively low population, whilst considering that the alternative may be worse: relying on another nation to develop the vaccine. Would we need to compete to get it? What would the cost be? Would there be licencing fees to manufacture locally — would we need a facility to produce it?

Perhaps it is time to diversify our research efforts and invest in our future preparedness, thereby mitigating the risk of having all our eggs in one basket!

Cytiva's support scientists answer the five most common questions they get about protein...

WaterGroup, mIoT team up to help businesses save water