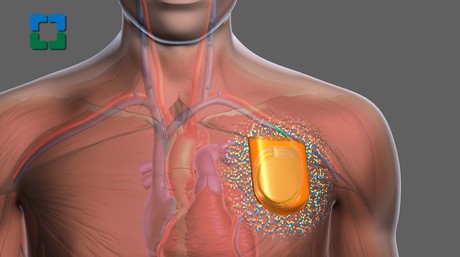 Encasing implantable cardiac devices such as pacemakers or defibrillators in an ‘envelope’ — a mesh sleeve embedded with antibiotics — reduces the risk of major device-related infection by 40% within one year with no increase in complications, according to new research from the US-based Cleveland Clinic.

Over 1.5 million patients receive a cardiac implantable electronic device worldwide every year. While these devices have improved and extended the lives of millions of patients, infection remains a major, potentially life-threatening complication — particularly following device replacements or other secondary procedures such as pocket revisions, lead changes and upgrades.

When an infection is confirmed, it usually requires the removal of the device and the leads in addition to an extended course of antibiotic therapy. Complication rates with transvenous lead extraction are low, but when they occur, they can be fatal, especially in leads that have been implanted for many years. In addition to the risk of extraction, patients go through prolonged hospitalisations, leaving them vulnerable to additional complications.

“Studies show that even when the device infection is managed properly with successful extraction procedure and the proper antibiotic therapy, short- and long-term mortality remain high in this group of patients,” said Khaldoun G Tarakji, associate section head of cardiac electrophysiology at the Cleveland Clinic Heart and Vascular Institute.

“Until now, in addition to adhering to strict sterile surgical techniques, preoperative antibiotics have been the only intervention proven in randomised controlled trial to minimise infection risk. Knowing the consequences, minimising risk isn’t good enough — our goal should be to get the infection rate as close to zero as we can.”

With this in mind, Tarakji and colleagues conducted a randomised, controlled clinical trial to assess the safety and efficacy of an envelope made of absorbable mesh that encases the defibrillator or pacemaker and designed to stabilise the device when it is implanted in the body. Manufactured by Medtronic, the envelope is coated with two antibiotics — minocycline and rifampin — which are continuously released into the device pocket over a minimum of seven days. The envelope is fully absorbed in approximately nine weeks and comes in two sizes — one for pacemakers and one for defibrillators.

A total of 6983 patients in 25 countries took part in the Worldwide Randomized Antibiotic EnveloPe Infection PrevenTion (WRAP-IT) trial, which began in 2015 and is claimed to be one of the largest global randomised controlled trials of a cardiac implantable electronic device ever conducted. Most patients (83%) were undergoing a revision, replacement or upgrade of an existing implanted cardiac device, while the rest were receiving their first biventricular pacemaker-defibrillator.

Patients were assigned at random to have their device encased in the antibiotic envelope or not. To minimise infection risk, all patients were treated with preoperative antibiotics. Additionally, all surgical teams participating in the study were required to use strict, sterile surgical techniques for every procedure.

Among patients who received the antibiotic envelope, 25 (0.7%) developed a major device infection within one year, compared with 42 patients (1.2%) in the control group. These results have since been published in The New England Journal of Medicine and presented at the American College of Cardiology’s 68th Annual Scientific Session, as well as the European Heart Rhythm Association 2019 Congress.

“The overall infection rate was lower than expected,” Tarakji said.

“Even so, using the antibiotic envelope led to an additional 40% reduction in major device-related infection during the first year after implantation. And we saw no increase in complications with the use of the envelope, indicating that it is safe to use.”

Tarakji acknowledged that use of the antibiotic envelope should not replace standard protocols for procedure safety, sound patient selection, the use of preoperative antibiotics and proper surgical techniques. It is, however, an additional tool to help drive down the risk of infection after the implantation of a cardiac device.

The researchers plan to conduct a follow-up study of the cost-effectiveness of using the antibiotic envelope. The patient database that was developed for the WRAP-IT trial may also help to answer other important questions related to device infections, including whether variations in practice such as the management of different blood-thinning medications and the use of different practices and surgical techniques have any effect on rates of infection.

“We now have a wonderful and rich source of information that we can use to educate ourselves about the association of different practices and variables with device infection,” Tarakji said.

The genetic variant found in women who feel less pain during childbirth leads to a...

Metformin, the most widely prescribed antidiabetic drug globally, promotes the excretion of blood...