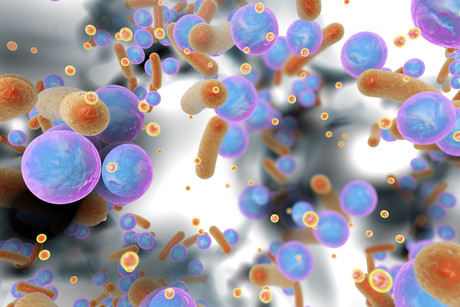 Over the course of a single week in February, the results of three separate studies into antibiotic resistance were made public, revealing how this phenomenon occurs in the first place, how it spreads between bacteria and how to stop it in its tracks.

On 14 February, it was revealed that physicists at McMaster University have identified a simple mechanism used by potentially deadly bacteria to fend off antibiotics, providing new insights into how germs adapt and behave at a level of detail never seen before. Their work was published in the journal Nature Communications Biology.

The researchers examined how the membranes of bacteria interacted with the antibiotic polymyxin B (PmB), which is commonly used to treat urinary tract infections, meningitis, and blood and eye infections. They concentrated on PmB because it was once considered the strongest drug of its kind — a last line of defence for physicians when nothing else worked — but that status came into question in 2016, when Chinese scientists discovered a gene that allowed bacteria to become resistant even to polymyxins.

“We wanted to find out how this bacteria, specifically, was stopping this drug in this particular case,” said Adree Khondker, first author on the study. “If we can understand that, we can design better antibiotics.”

Employing techniques typically used by physicists for materials research, the team used highly specialised equipment to peer deep into the bacterial membrane, capturing images with a resolution so fine they could view individual molecules at approximately one-millionth the width of a strand of human hair.

“If you take the bacterial cell and add this drug, holes will form in the wall, acting like a hole-puncher and killing the cell,” said Khondker. “But there was much debate on how these holes were formed in the first place.”

When these antibiotics are working properly, researchers know the basic laws of physics apply: because the drug is positively charged it is attracted to the negatively charged bacteria. At the same time, the bacterial membrane is employing a repulsive force as it attempts to repel the drug.

Through imaging and simulations, researchers pinpointed which part of the antibiotic enters the membrane, where it enters and how deeply it penetrates. They simulated these processes on microsecond timescales with high-end gaming computers in their lab.

They determined that when a bacterium has become resistant, its membrane is more rigid and the charge is weaker, making it much less attractive to the drug and harder to penetrate. “For the drug, it’s like going from cutting Jello to cutting through rock,” said Khondker.

“There has been a lot of speculation about this mechanism,” said lead author Professor Maikel Rheinstädter. “But for the first time we can prove the membrane is more rigid and the process is slowed.

“There are many, many bacteria out there, and so many antibiotics, but by proposing a basic model that applies to many of them, we can have a much better understanding on how to tackle and predict resistance better.”

A few days later, an international research collaboration led by Helmholtz Zentrum München shed new light on the mechanisms by which antibiotic resistance genes are transferred between bacteria. Published in the journal Microbiome, their study revealed that these mechanisms are more varied than previously thought — and resistance spreads faster as a result.

As noted by corresponding author Professor Dr Michael Schloter, the rise of antibiotic resistance is especially alarming because microorganisms are resistant not just to one antibiotic, but to a whole range of different substances. This poses particular problems in the treatment of infectious diseases.

“We therefore set out to discover the mechanisms responsible for resistance development,” said Prof Schloter, who serves as head of the Research Unit for Comparative Microbiome Analyses (COMI) at Helmholtz Zentrum München.

He and his team, together with Danish scientists led by Gisle Vestergaard (University of Copenhagen and Helmholtz Zentrum München), investigated fish raised in aquaculture; specifically, the South American species Piaractus mesopotamicus, otherwise known as pacu. The fish received the antibiotic florfenicol in their food for 34 days, with the researchers taking samples from the digestive tract of the fish and looking for relevant genetic changes in the gut bacteria.

“As expected, administration of the antibiotic induced an increase in the genes responsible for resistance to that antibiotic,” said COMI doctoral student Johan Sebastian Sáenz Medina, lead author of the paper. “One example are genes for pump proteins, which simply remove the active substance from the bacteria again.

“However, we were particularly surprised by the different mechanisms that we could detect by which antibiotic resistance genes are spread amongst gut bacteria of the fish. This suggests that the bacteria also exchange resistance through viruses, known as phages, and transposons.”

Further metagenomic studies confirmed that these mobile genetic elements induce a fast distribution of resistance genes among genomes of different organisms. So far it has been postulated that only plasmids (in essence, easily transferable mini-chromosomes) are mainly responsible for the exchange of resistance genes.

“The finding that resistance is also extensively transferred between bacteria without the involvement of plasmids is really quite surprising,” Prof Schloter said. “Based on this observation, relevant dissemination models should be reviewed and modified. In addition, our data certainly lead us to question whether and to what extent we should continue to use antibiotics in the world’s increasing number of aquacultures.”

One day after that, the American Society for Microbiology (ASM) reported a breakthrough regarding the antimicrobial-resistance gene VCC-1, a ß-lactamase gene which was discovered in 2016 in benign close relatives of virulent Vibrio cholerae, which causes cholera. Canadian researchers have how found a way to block the VCC-1 enzyme, which disables that resistance gene. Their work has been published in the ASM journal Antimicrobial Agents and Chemotherapy.

VCC-1 was first found by investigators from the Public Health Agency of Canada, on frozen shrimp that had been imported from India and sold in a Canadian grocery store. A handful of other ß-lactamase resistance genes have also emerged from India. ß-lactamase genes code for enzymes that can break down ß-lactams, which are a critically important class of antimicrobials.

“We noticed that VCC-1 belongs to the same class of [antibiotic resistance] enzymes that avibactam is active against,” said Professor Brian Mark, lead author on the study from the University of Manitoba — avibactam having recently been approved by the US FDA for treating various infections caused by antibiotic-resistance pathogens. “I said, ‘let’s try avibactam’,” and sure enough, it blocks the enzyme quite potently.”

To see how this was achieved, Dr Mark and his collaborators used X-ray crystallography, a method of visualising the three-dimensional structure of molecules at the atomic level. The X-ray crystallography showed that the avibactam molecule has a protuberance that fits snugly into a pocket on VCC-1 — “the same pocket that VCC-1 uses to break down the antibiotic”, Dr Mark said.

“We went back to the original strain, the Vibrio the VCC-1 was originally found in,” Dr Mark continued. “We grew it up and demonstrated that if you try to kill this bacteria with carbapenem [an important beta lactam antimicrobial], it is very resistant, which is alarming, as this is a frontline, last-resort antibiotic — and here it is sitting on shrimp that people are eating. But if you add avibactam to the carbapenem, it becomes really potent, because you blocked the VCC-1 which was enabling the resistance.”

With antibiotic resistance one of the top threats to public health worldwide, it is clearly a serious issue that is not going to be solved overnight. But so long as we are able to learn more about the nature of this threat, and come up with new and innovative ways to combat it, there remains some hope that it may one day be overcome.