Biological tissue could be 3D printed 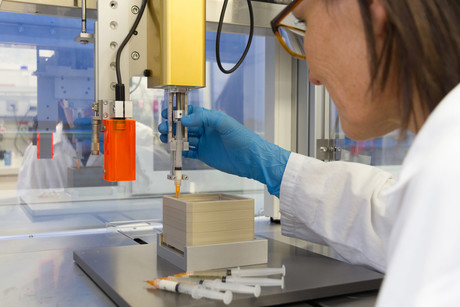 Researchers from the Fraunhofer Institute for Interfacial Engineering and Biotechnology IGB have been working with the University of Stuttgart for a number of years on a project to develop and optimise suitable bioinks for additive manufacturing, in the hope that we will soon be using 3D-printed biologically functional tissue to replace irreparably damaged tissue in the body.

By varying the composition of the biomaterial, the researchers have already succeeded in expanding their portfolio to include bone and vascularisation inks. That has laid the foundations for manufacturing bone-like tissue structures featuring capillary networks.

3D printing is taking on increasing importance in the realm of regenerative medicine, with scientists hoping to use this additive manufacturing method to create bespoke biocompatible tissue scaffolds that will replace irreparably damaged tissue. Researchers at Fraunhofer IGB in Stuttgart are also working on bio-based inks for manufacturing biological implants in the laboratory using 3D-printing techniques.

To create a 3D object in the desired pre-programmed shape, the team utilises a layer-by-layer approach to print a liquid mixture comprising biopolymers such as gelatin or hyaluronic acid, aqueous medium and living cells. These bioinks remain in a viscous state during printing and are then exposed to UV light to crosslink them into water-containing polymer networks called hydrogels. 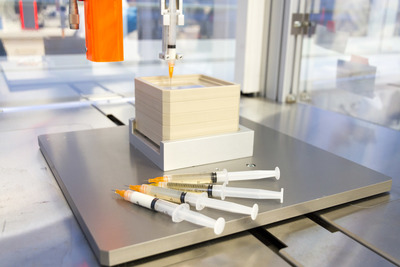 Scientists can chemically modify biomolecules to provide the resulting gels with different degrees of crosslinking and swellability. This makes it possible to imitate the consistency of natural tissue — from stronger hydrogels for cartilage to softer gels for fatty tissue. Broad adjustments can also be made to the level of viscosity.

Dr Achim Weber, head of the Particle-Based Systems and Formulations Group at Fraunhofer IGB, explained one of the key challenges encountered in the process: “At [a] room temperature of 21°C, gelatin is as firm as jelly, which is no good for printing. To prevent temperature-dependent gelation and to enable us to process it regardless of temperature, we ‘mask’ the side chains of the biomolecules that are responsible for gelling gelatin.”

A further challenge is that the gelatin must be chemically crosslinked to prevent it from liquefying at temperatures of around 37°C. To achieve this, it is functionalised twice: in this case, the research team has opted for integration of crosslinkable methacryl groups into the biomolecules, thereby substituting various parts of the non-crosslinking, masking acetyl groups — a unique approach in the field of bioprinting.

“We formulate inks that offer adjusted conditions for different cell types and tissue structures,” said Dr Kirsten Borchers, who is responsible for bioprinting projects in Stuttgart.

The researchers have already succeeded in producing bone ink on the basis of the material kit they created. Their goal is to enable the cells processed in the kit to regenerate the original tissue; in other words, to form bone tissue themselves. The secret to creating the ink lies in a special mixture of the bone mineral powder hydroxylapatite and biomolecules.

“The best artificial environment for the cells is one that comes closest to the natural conditions in the body,” said Dr Borchers. “That’s why the role of the tissue matrix in our printed tissues is played by biomaterials that we generate from elements of the natural tissue matrix.”

The vascularisation ink forms soft gels that support the establishment of capillary structures. Cells that form blood vessels are incorporated in the inks. The cells move, migrate toward each other and form systems of capillary networks consisting of small tubular structures. If this bone substitute was to be implanted, the biological implant would connect to the recipient’s blood vessel system much faster than an implant without capillary-like pre-structures, as detailed in the relevant literature.

The Stuttgart team’s latest research project involves developing matrices to regenerate cartilage. As noted by the team’s bioengineer, Lisa Rebers, “Whatever type of cell we isolate from body tissue and multiply in the laboratory, we have to create a suitable environment in which they can fulfil their specific functions over longer periods of time.”

Fraunhofer IGB is continuing to pursue its research in the Mass Personalization High-Performance Center in Stuttgart as part of a joint initiative with the Fraunhofer Institute for Manufacturing Engineering and Automation IPA and the University of Stuttgart.