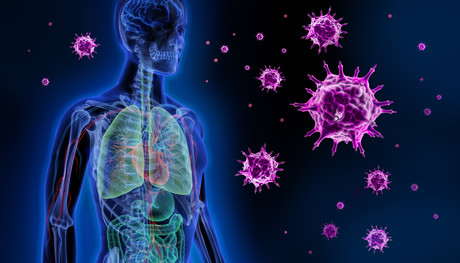 The first type of influenza virus we are exposed to in early childhood dictates our ability to fight the flu for the rest of our lives, according to two recent studies.

The Wuhan coronavirus may be front of mind right now, but let us not forget that influenza viruses of subtype H1N1 and H3N2 both regularly cause seasonal epidemics — though curiously, each has a different age-specific impact. Specifically, H3N2 causes a greater proportion of cases in older adults than H1N1, and more deaths overall.

Given that people tend to gain the strongest immune memory of influenza viruses encountered in childhood, differences in H1N1 and H3N2’s age-specific impacts may reflect that individuals born in different eras of influenza circulation have been imprinted with different immunological risk profiles — what’s known as ‘antigenic imprinting’. That is, early exposure to H1N1 or H3N2 imprints itself on our immunity and disproportionately affects the body’s lifelong response to the flu. Another theory is that H3N2 may be more able to infect immunologically experienced adults because it evolves slightly faster than H1N1 and can more quickly escape immune memory.

Scientists from Canada’s Université de Montréal (UdeM) and McMaster University recently revealed new evidence for the former theory, with their study — published in the journal Clinical Infectious Diseases — going further than just confirming that specific age patterns are associated with one subtype or the other during a single influenza season. As noted by lead author Professor Alain Gagnon, from UdeM, “We took advantage of a unique ‘natural experiment’ — with observational data — to show how the change in subtype dominance during one season appears to lead, practically in real time, to a change in susceptibility by age.”

The researchers analysed weekly sentinel data from the Institut national de santé publique du Québec (INSPQ) from the 2018–19 flu season, which was highly unusual because both strains of influenza A dominated at different periods of time. Typically, only one strain dominates each flu season and accounts for almost all cases.

For instance, older adults who were exposed at younger ages to the H1N1 virus, which emerged during the Spanish flu pandemic in 1918, have many antibodies to fight the virus and therefore do quite well when exposed today to the 2009 H1N1 virus, a close cousin. But in a H3N2-dominated season, they do poorly, with significantly higher mortality rates.

On the other hand, people born during the 1968 pandemic caused by H3N2 are better equipped to deal with influenza during seasons when H3N2 is dominant. In 2017–18, for example, there was a small dip in the incidence of influenza of people born between 1968 and 1977.

“People’s prior immunity to viruses like flu, including the current coronavirus, can have a tremendous impact on their risk of becoming ill during subsequent epidemics and pandemics,” said co-author Associate Professor Matthew Miller, from McMaster University.

“Understanding how their prior immunity either leaves them protected or susceptible is really important for helping us to identify the populations who are most at risk during seasonal epidemics and new outbreaks.”

The researchers hope to further explore transmission dynamics by analysing how viruses spread within households, where exposure is high and prolonged. In this environment, they can assess how imprinting may or may not affect the transmission of each strain. This could have important implications for pandemic and epidemic planning, allowing public health officials to assess who might be at greater risk in any given year, based on their age and what viruses were dominant at the time of their birth.

The fact that elderly cohorts showed relatively weak immune protection against H3N2, even after living through decades of seasonal exposure to or vaccination against H3N2, suggested that antibody responses acquired in adulthood do not provide the same strength or durability of immune protection as responses primed in childhood. Based on the findings, the researchers project that the relatively low mortality burden of H1N1 may increase in the coming decades, as cohorts that lack H1N1-specific imprinting eventually reach old age.

“The idea that childhood exposures imprint exceptionally strong immune memory has been around for decades, but we are excited to show that these birth year-specific differences in memory actually shape epidemic outcomes,” the study authors said.

“This study also provides some clues to which parts of the influenza virus our immune system is best at remembering and attacking. We hope this information will be useful as immunologists try to figure out why immune memory becomes biased in the first place, and also as they try to develop a universal influenza vaccine.”