Children use both brain hemispheres to understand language 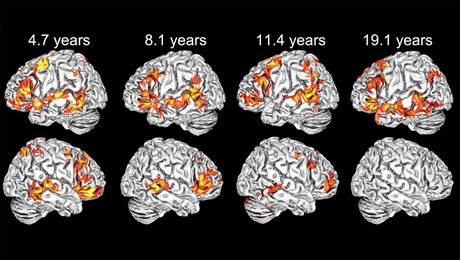 Whereas adults process most discrete neural tasks in specific areas in one or the other of their brain’s two hemispheres, infants and young children use both the right and left hemispheres to do the same task.

That’s according to a new study focused on the processing of spoken sentences, published in the journal PNAS by Georgetown University Medical Center neuroscientists. The work was led by Professor Elissa L Newport, Dr Olumide Olulade and Assistant Professor Anna Greenwald, and solves a mystery that has puzzled clinicians and neuroscientists for a long time.

In almost all adults, sentence processing is possible only in the left hemisphere, according to both brain scanning research and clinical findings of language loss in patients who suffered a left hemisphere stroke. But in very young children, damage to either hemisphere is unlikely to result in language deficits; language can be recovered in many patients even if the left hemisphere is severely damaged. This suggests that language is distributed to both hemispheres early in life; however, traditional scanning had not revealed the details of these phenomena until now.

“It was unclear whether strong left dominance for language is present at birth or appears gradually during development,” Prof Newport said.

Now, using functional magnetic resonance imaging (fMRI) analysed in a more complex way, the researchers have shown that the adult lateralisation pattern is not established in young children and that both hemispheres participate in language during early development. Brain networks that localise specific tasks to one or the other hemisphere start during childhood but are not complete until a child is about 10 or 11, Prof Newport explained.

The study, originally run by the Children’s National Medical Center, enrolled 39 healthy children, aged 4–13; Prof Newport’s lab added 14 adults, aged 18–29, and conducted a series of new analyses of both groups. The participants were given a well-studied sentence comprehension task and the analyses examined fMRI activation patterns in each hemisphere of the individual participants, rather than looking at overall lateralisation in group averages. Investigators then compared the language activation maps for four age groups: 4–6, 7–9, 10–13 and 18–29.

Penetrance maps revealed the percentage of subjects in each age group with significant language activation in each voxel of each hemisphere (a voxel is a tiny point in the brain image, like a pixel on a television monitor). Investigators also performed a whole-brain analysis across all participants to identify brain areas in which language activation was correlated with age.

Researchers found that, at the group level, even young children show left-lateralised language activation. However, a large proportion of the youngest children also show significant activation in the corresponding right-hemisphere areas. In adults, the corresponding area in the right hemisphere is activated in quite different tasks, for example, processing emotions expressed with the voice. In young children, areas in both hemispheres are each engaged in comprehending the meaning of sentences, as well as recognising the emotional effect.

According to Prof Newport, “... higher levels of right hemisphere activation in a sentence processing task and the slow decline in this activation over development are reflections of changes in the neural distribution of language functions and not merely developmental changes in sentence comprehension strategies”. She added that, if the team were able to do the same analysis in even younger children, “it is likely we would see even greater functional involvement of the right hemisphere in language processing than we see in our youngest participants”.

“Our findings suggest that the normal involvement of the right hemisphere in language processing during very early childhood may permit the maintenance and enhancement of right hemisphere development if the left hemisphere is injured,” Prof Newport said. The results therefore suggest a possible reason why children appear to recover from neural injury much more easily than adults.

“Use of both hemispheres provides a mechanism to compensate after a neural injury,” Prof Newport said. “For example, if the left hemisphere is damaged from a perinatal stroke — one that occurs right after birth — a child will learn language using the right hemisphere. A child born with cerebral palsy that damages only one hemisphere can develop needed cognitive abilities in the other hemisphere. Our study demonstrates how that is possible.”

The investigators are now examining language activation in teenagers and young adults who have had a major left hemisphere stroke at birth.

Image caption: Examples of individual activation maps in each of the age groups. Strong activation in right-hemisphere homologs of the left-hemisphere language areas is evident in the youngest children, declines over age and is entirely absent in most adults.

Statins could help save Tasmanian devils

Cholesterol-lowering drugs could help delay the spread of the deadly Tasmanian devil facial...

Scientists have injected human stem cells into primate embryos and were able to grow chimeric...