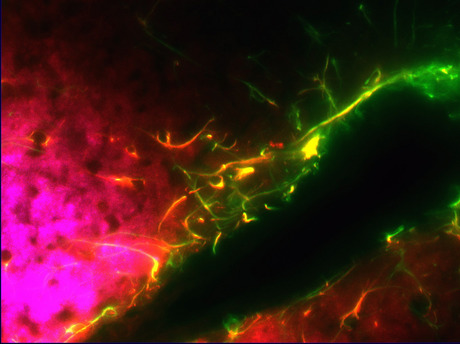 The Australian Research Council (ARC) has awarded a Linkage Grant of $340,000 to a research consortium investigating how stem cells can be used to relieve chronic pain.

The consortium brings together innovative cell labelling technologies developed by the ARC Centre of Excellence for Nanoscale BioPhotonics (CNBP) and a transdisciplinary team of researchers from Macquarie University, the University of Adelaide and regenerative medicine company Regeneus (ASX:RGS).

“Because neuropathic pain is driven by the immune system, we can use stem cells to control and shut down the pain,” explained Professor Hutchinson, who is based at the University of Adelaide. “However, stem cells can secrete both good (anti-inflammatory) and bad (inflammatory) molecules; therefore, the use of cells that secrete the right molecules is going to be critical.”

With this in mind, CNBP Deputy Director Professor Ewa Goldys and her group at Macquarie University have developed cell labelling technologies to identify and select cells based on the molecules that they are secreting. This technology will be used for the manufacture of stem cells for the treatment of chronic pain.

The study will also build on Professor Hutchinson’s previous work which established that female chronic pain is more widespread than male pain. He noted, “Building on our ability to sense what is happening in the body at the cellular and molecular level, this project aims to develop a new understanding of pain as well as its differences related to gender.

“Establishing the fundamental mechanism in pain, the role of immune signalling and molecular mediators, we will enable true pain-modifying treatments which address pivotal trigger points in both females and males.”

Image caption: Immune cell responses within the central nervous system in response to chronic pain. Image courtesy of CNBP under CC BY 2.0

HKU researchers helped identify that the SOX5 gene, which is known to be essential for the...

WaterGroup, mIoT team up to help businesses save water