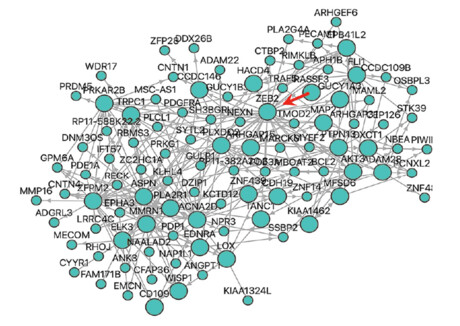 An international team of scientists has revealed how coronary heart disease can be triggered by complex networks of genes that interact on a scale never known before. Their findings could make it significantly easier to screen for the disease, which is caused by thousands of genes that interact with other risk factors like smoking and obesity.

Six hundred patients who had coronary heart disease and another 250 without coronary heart disease were included in the team’s study. All underwent open chest surgery for coronary heart artery bypass surgery or other medically indicated reasons, and tissue samples were collected by researchers in the lab of Dr Arno Ruusalepp, Chief Vascular Surgeon at the Tartu University Hospital in Estonia.

Gene activity was analysed from samples of blood, liver, skeletal muscle, visceral abdominal and subcutaneous fat, and two pieces of the arterial wall taken from different parts of the heart and blood vessels. The researchers tested out the different ways that gene activity may be associated with the development of coronary heart disease, using advanced computer programs to test out how the activity of all of the disease-related genes was grouped together in different combinations.

Although recent studies have shown that about 20% of the risk associated with the disease may be linked to differences in a person’s DNA sequences, the new results, published in the journal Nature Cardiovascular Research, showed that up to an additional 60% of the risk associated with coronary heart disease could be explained by 224 of these gene regulatory networks and that many of these networks could help explain the disease severity in individual cases. Of those networks, 135 were located within one type of tissue whereas the remaining 89 represented coordinated gene activity across multiple tissues.

“We have long suspected that the genes we inherit play a far larger role in our chances of developing conditions such as coronary heart disease, but until now we didn’t know just how these genes were working together,” said study co-author Professor Jason Kovacic, Executive Director at Sydney’s Victor Chang Cardiac Research Institute.

“It turns out that there are vast and complex networks of genes at work, which are signalling to one another, and for the first time we now have a comprehensive map of how they are operating. This has never been accounted for until now and shines a whole new light on how and why we are predisposed to heart disease.

“This opens up the possibility of being able to far more accurately predict a person’s risk of heart disease, which would allow for earlier assessments and potentially better treatments.”

The multi-tissue networks appeared to have the greatest impact. On average they could explain three times more of the disease risk than the single-tissue ones. One example of a multi-tissue network, called GRN165, accounted for 4.1% of risk for coronary heart disease and involved 709 genes active in the arterial wall as well as the subcutaneous fat tissue.

“We found that gene networks work like airplane traffic patterns,” said senior author Dr Johan LM Björkegren, from the Icahn School of Medicine at Mount Sinai. “Just as a delay at one airport in a key state can disrupt flights in the entire nation, we found that a slight change in the activity of key genes in one tissue can disrupt the activity of other genes throughout the rest of the body.”

Finally, the analysis suggested that hormones that help fat cells communicate with other organs — particularly the liver — play a critical role in coordinating the multi-organ networks. Support for this idea was, in part, based on experiments in mice when injections of some of these hormones altered blood fat and sugar levels.

According to Prof Kovacic, the research will be central to the development of precision medicine — where patients are diagnosed and treated depending on how their unique genetics interact with risk factors in the environment. “Here,” he said, “gene-regulatory networks may play a central role as an explanatory model to be used with the increasingly sophisticated molecular screening tools we have at our disposal today.

“We expect our findings will be translated into the clinical work of diagnosing and treating patients. Indeed, we are already working on this. We believe it’s highly likely that we will be able to map a patient’s gene networks and detect their disease risk.

“This research could also lead to the development of specific therapies for many of the new gene targets that have been found, and also allow for the possibility of being able to alter the most important, or apex genes in each network. It may also eventually see us altering problem genes at the top of the gene network, which can impact the hundreds or thousands of genes below, and lessen the risk from certain conditions.

“In addition, it’s almost certain that these gene networks are critical to many other human diseases like high blood pressure, diabetes and stroke. So this is the beginnings of a whole new way of working to better understand and treat diseases.”