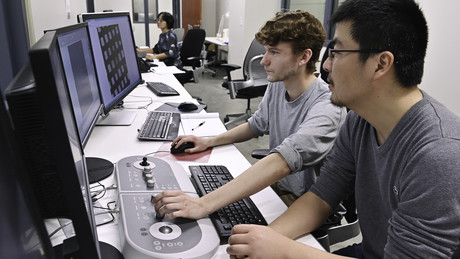 Researchers from The University of Texas at Austin (UT Austin) and the US National Institutes of Health (NIH) have hopefully made a breakthrough towards developing a vaccine for the 2019 novel coronavirus (SARS-CoV-2) by creating a 3D atomic-scale map of the part of the virus that attaches to and infects human cells, known as the spike (S) protein. This protein represents an important target for therapy, and mapping its structure will provide information to guide vaccine design and development.

Like other coronaviruses, SARS-CoV-2 particles are spherical and have proteins called spikes protruding from their surface. These spikes latch onto human cells, then undergo a structural change that allows the viral membrane to fuse with the cell membrane. The viral genes can then enter the host cell to be copied, producing more viruses. Recent work shows that, like the virus that caused the 2002 SARS outbreak, SARS-CoV-2 spikes bind to receptors on the human cell surface called angiotensin-converting enzyme 2 (ACE2).

UT Austin’s Associate Professor Associate Professor Jason McLellan and his colleagues have spent many years studying other coronaviruses, including SARS-CoV and MERS-CoV. They had already developed methods for locking coronavirus S proteins into a shape that made them easier to analyse and could effectively turn them into candidates for vaccines.

“As soon as we knew this was a coronavirus we felt we had to jump at it, because we could be one of the first ones to get this structure,” Assoc Prof McLellan said. “We knew exactly what mutations to put into this, because we’ve already shown these mutations work for a bunch of other coronaviruses.”

After Chinese scientists released the genome sequence of SARS-CoV-2 to the public, Assoc Prof McLellan’s team isolated a piece of the genome predicted to encode for its spike protein based on sequences of related coronaviruses. The team then used cultured cells to produce large quantities of the protein for analysis. The molecule the team produced represents only the extracellular portion of the S protein, but it is enough to elicit an immune response in people — and thus serve as a vaccine.

Cryo-electron microscopy (cryo-EM) was used to take detailed pictures of the structure of the spike protein, which involved freezing virus particles and firing a stream of high-energy electrons through the sample to create tens of thousands of images. These images were then combined to yield a detailed 3D view of the virus. Having designed and produced samples of the stabilised S protein, it took about 12 more days to reconstruct the 3D atomic-scale map, called a molecular structure, of the protein and submit a manuscript to the journal Science, which has since been published.

This is a 3D atomic-scale map, or molecular structure, of the 2019-nCoV spike protein. The protein takes on two different shapes, called conformations — one before it infects a host cell and another during infection. This structure represents the protein before it infects a cell, called the prefusion conformation. Image credit: Jason McLellan/University of Texas at Austin.

The researchers found that the SARS-CoV-2 spike was 10 to 20 times more likely to bind ACE2 on human cells than the spike from the 2002 SARS virus. This provides a potential explanation for the apparent ease of human-to-human transmission demonstrated for the new virus, the authors say, though more studies are needed to investigate this possibility.

Furthermore, despite similarities in sequence and structure between the spikes of the two viruses, three different antibodies against the 2002 SARS virus could not successfully bind to the SARS-CoV-2 spike protein. This suggests that potential vaccine and antibody-based treatment strategies will need to be unique to the new virus.

The researchers are currently working on vaccine candidates targeting the SARS-CoV-2 spike protein. They also hope to use the spike protein to isolate antibodies from people who have recovered from infection by the new coronavirus. If produced in large quantities, such antibodies could potentially be used to treat new infections before a vaccine is available. In addition, NIH researchers are pursuing other approaches to treating the virus.

Next, Assoc Prof McLellan’s team plans to use their molecule to pursue another line of attack against the virus that causes COVID-19, using the molecule as a ‘probe’ to isolate naturally produced antibodies from patients who have been infected with the novel coronavirus and successfully recovered. In large enough quantities, these antibodies could help treat a coronavirus infection soon after exposure. For example, the antibodies could protect soldiers or healthcare workers sent into an area with high infection rates on too short notice for the immunity from a vaccine to take effect.

Meanwhile, German researchers have made their own breakthrough investigating how SARS-CoV-2 penetrates cells. They have identified a cellular enzyme that is essential for viral entry into lung cells — the protease TMPRSS2 — and found that a clinically proven drug known to be active against TMPRSS2 was able to block SARS-CoV-2 infection.

A team led by infection biologists from the German Primate Center, including researchers from Charité, the University of Veterinary Medicine Hannover, Foundation, the BG Unfallklinik Murnau, the LMU Munich, the Robert Koch Institute and the German Center for Infection Research, wanted to find out how SARS-CoV-2 enters host cells and how this process can be blocked. The scientists identified a cellular protein that is important for the entry of SARS-CoV-2 into lung cells, with the results published in the journal Cell.

“Our results show that SARS-CoV-2 requires the protease TMPRSS2, which is present in the human body, to enter cells,” said Stefan Pöhlmann, head of the Infection Biology Unit at the German Primate Center. “This protease is a potential target for therapeutic intervention.”

Since it is known that the drug camostat mesilate inhibits the protease TMPRSS2, the researchers investigated whether it can also prevent infection with SARS-CoV-2. Camostat mesilate is a drug approved in Japan for use in pancreatic inflammation.

“We have tested SARS-CoV-2 isolated from a patient and found that camostat mesilate blocks entry of the virus into lung cells,” said Markus Hoffmann, the lead author of the study. “Our results suggest that camostat mesilate might also protect against COVID-19. This should be investigated in clinical trials.”