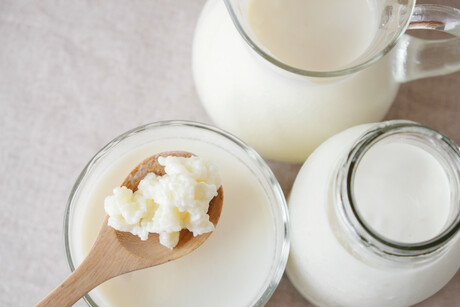 Fermented foods can be a primary source of potentially probiotic lactic acid bacteria (LAB) for the human gut, as shown in an international study.

The majority of fermented foods contain thousands of live LAB that are ingested when we consume products such as yoghurt and cheese. Some of these LAB have probiotic properties, so many fermented foods are believed to be naturally healthy as a result.

But how many of these bacteria reach the gut, and how many become part of the gut microbiome? Researchers at Italy’s University of Naples Federico II and University of Trento, in collaboration with Ireland’s Teagasc and the APC Microbiome Ireland SFI Research Centre, have analysed the genetic information from LAB strains (genomes) found in fermented foods and in human faeces to answer these questions.

Fermentation processes have been studied for over a century, but the practice of fermenting food as a strategy for the preservation of milk, meat and vegetables has been used for millennia. The role of LAB is to produce molecules that preserve the food and to contribute to the key characteristics, such as taste of the food. In other words, there would be no yoghurt or cheese without the activity of these important microorganisms.

Several strains of LAB are also well-known probiotics, the most common belonging to the genus Lactobacillus. Probiotics are of considerable interest as supplements for various purposes but also for their potential to add to the value and health-promoting properties of certain foods.

The researchers used computational analysis tools to reconstruct LAB genomes from about 300 foods and nearly 10,000 human faecal samples from different continents, looking at the distribution of LAB in humans based on geographical origin, age and lifestyle. LAB were found in relatively low abundance in the human faeces and their prevalence depended on age, lifestyle and geography. The LAB most frequently found in the human faeces were Streptococcus thermophilus and Lactococcus lactis, which are commonly found in yoghurt and cheese.

The DNA sequences of about 3000 LAB genomes were also compared, and analysis revealed a high level of similarity of LAB from food with those of LAB from the human gut. These findings, published in the journal Nature Communications, suggest that consuming foods rich in LAB can enrich our intestines with these potentially probiotic microorganisms.

“Fermented foods are the principal ecological niche for LAB in nature,” said Professor Danilo Ercolini, senior author of the study. “Our results support the hypothesis that food is the major source of LAB for the gut microbiome. This research also offers hints and methodologies to implement novel strategies for tracing the life of probiotics and other LAB from foods and/or supplements all the way to the human body.

Of course much is still to be learned about the specific benefits of fermented foods for our physical and mental health. Recently a number of studies have suggested that the consumption of fermented foods is associated with an improvement in mood in humans, but the reason for this benefit was not clear.

One way in which fermented foods could alter our behaviour is by changing the gut microbiome, as it has become clear that our gut bacteria can communicate with our brain by producing chemicals called neurotransmitters — a communication method that has been referred to as the ‘gut–brain axis’.

Researchers from the APC Microbiome Ireland SFI Research Centre and Teagasc wanted to see if kefir, a fermented milk drink, could affect the gut–brain axis. The product is produced when a kefir ‘grain’, which contains a community of microorganisms, is added to milk to initiate natural fermentation. The grains ferment the milk, incorporating some of their friendly organisms to create the cultured product.

Research has previously shown that consumption of specific kefirs, or kefir microorganisms, can reduce weight gain or beneficially impact the immune system in rodents. However, it was unknown if different kefirs have different effects when consumed, and if kefir consumption can alter behaviour. To answer this question, researchers administered two distinct kefirs (Fr1 and UK4) to mice, revealing their results in the journal Microbiome.

The two varieties of kefir thus had similar effects on the gut microbiome of mice and increased its capacity to produce the neurotransmitter GABA, yet had different positive effects on their immune systems and behaviour. According to research leader Professor John Cryan, “More research needs to be performed to identify why different kefirs have different effects when consumed. And more research is needed to investigate the impact of kefir on humans.”