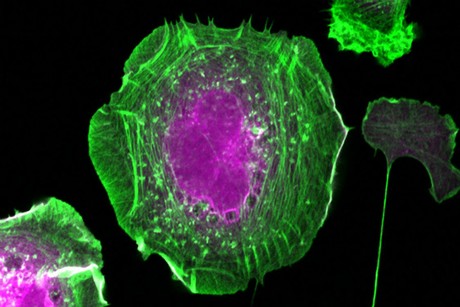 The researchers, from the Montreal Clinical Research Institute (IRCM) and Université de Montréal (UdeM), threw 56 ‘baits’ into human cells they were incubating in their laboratory. The goal was to catch and identify the proteins that attach to those of the Rho family, famous in the cell biology world since the discovery in the early 1990s that they dictate how pieces of the cell skeleton — the ‘cytoskeleton’ — are assembled.

In humans, the 20 members of the Rho family are scattered on the inner surface of cell membranes and act like small switches. When a signal from outside or inside the cell activates them, they stimulate other proteins to force the cytoskeleton to add to or remove parts from its framework.

Out of all these proteins, only three, to date, have been thoroughly studied by researchers: Cdc42, Rac1 and RhoA. Cdc42 acts as the lead protein: it indicates the path that white blood cells must take to find a site of infection. Rac1 activates the engines that drive a non-muscular cell forward. RhoA stimulates the formation of fibres that allow cells to contract or form resistant tissues as they come together to produce, for example, the wall of a blood vessel.

But what are the other proteins doing? And what other proteins do they interact with? To find out, UdeM cell biologist Jean-François Côté and his team went fishing for answers, with the results published in the journal Nature Cell Biology.

Into human cells growing in incubators in their lab, they cast their baited lines, forcing these cells to produce proteins with two heads: one containing a single side of a protein in the Rho family, the other a ‘biotin ligase’ enzyme. The latter acts like an elite sniper in the cell, luring and labelling every passing protein with the help of its partner, a member of the Rho family. Every protein that approached the bait was thus labelled with biotin. Next, Côté and his team had to shred the cells to identify, one by one, each labelled protein.

Using 28 two-headed proteins and presenting the GTPases — a superfamily of enzymes that function as ‘molecular switches’ and are involved in regulating many cellular processes — in both active and inactive configurations, the team caught a total of 9939 proteins. Some were already known to the scientists, including the GTPases’ activators and deactivators. But the researchers also discovered hundreds of individual proteins with yet-to-be-defined roles.

These discoveries include the missing link of the cytoskeleton Rho process identified in the early 1990s. Back then, researchers noticed that the RhoA protein indirectly activates another protein, ERM, causing it to stabilise the cytoskeleton — but they didn’t know the precise mechanism behind this process. Côté and his team have now found the answer: what forges the link between RhoA and ERM is a protein called SLK.

The IRCM team also looked at other proteins that, until now, were virtually unknown to biologists, namely GARRE and PLEKHG3. The scientists demonstrated that these proteins naturally attach to the active forms of Rac1 and RhoG, respectively. What’s left to understand is the exact function of these associations. To accelerate the process, the team revealed characteristics of other molecules they caught in their experiments — enough to give raw material to dozens of laboratories worldwide.

Through their research, Côté and his team have not only cleared up a whole area of cell biology, but have also demonstrated the effectiveness of their unique ‘fishing’ method. Côté now plans to use it to better understand how other molecular switches work, especially those in the Ras family — proteins that lie at the centre of many types of cancer.

Pfizer and BioNTech have completed the final efficacy analysis in the ongoing Phase 3 study of...