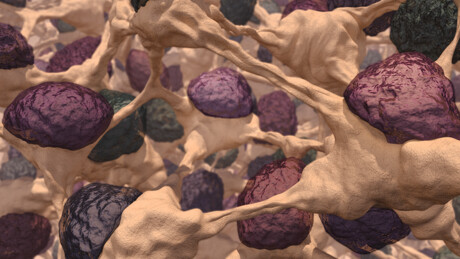 Researchers at the Garvan Institute of Medical Research have uncovered a key strategy the immune system uses to generate effective antibodies, which could inform vaccine design for some of the most challenging viruses.

In experimental models, the researchers discovered that the immune system mutated its B cells to generate more finely tuned antibodies when the targets for those antibodies, referred to as ‘antigens’, were structurally flexible, rather than rigid. Their findings, published in the journal PNAS, address what co-senior author Professor Daniel Christ describes as “a central issue for developing vaccines” — how the immune system generates antibodies that recognise ‘foreign’ from ‘self’.

Our immune system is constantly challenged by foreign microbes such as viruses. To clear a virus from our body, and to remember and eliminate it more quickly the next time we’re exposed, our immune system evolves. This happens in structures called germinal centres within our lymph nodes, where B cells multiply and mutate to produce antibodies more finely tuned to target the virus.

“Long-lasting immunity is an important challenge for the immune system — antibodies have to bind like glue to foreign threats such as viruses but avoid any of the body’s own molecules, as this can lead to autoimmunity,” said Dr Deborah Burnett, co-first author of the study.

At a sub-microscopic level, some molecules bend and move more than others — some are more rigid, while others are flexible. The same is true for molecules on viruses; for example, the spike protein on the SARS-CoV-2 virus that causes COVID-19 is highly flexible to adopt multiple different shapes.

“There is a longstanding debate about whether flexible or rigid antigens in vaccines are more likely to elicit a lasting immune response in humans; we wanted to help answer that question,” said Dr Peter Schofield, co-first author of the study.

“Using an artificial pair of foreign and self-molecules that are very similar, we created different versions of the same antigen, altering one connection that made it either more rigid or more flexible.”

The researchers then investigated how the immune systems of mice generated antibodies to the different molecules. They discovered that when the foreign antigen was more flexible, the germinal centre could employ a greater number of evolution strategies to make antibodies that bound foreign but not self-molecules.

The ability to produce antibodies that bind foreign but not self-molecules is a major hurdle for vaccine development — particularly when it comes to HIV vaccines, said co-senior author Professor Chris Goodnow, “which have so far been blocked by checkpoints in the body that avoid an autoimmune response. What we have discovered is fundamental to establishing long-lived immunity, which will inform vaccine design going forward.”

Prof Goodnow added, “There is circumstantial evidence that antibodies against the spike molecule on the SARS-CoV-2 virus may also recognise ‘self’. This may be an explanation for why antibody levels against the novel coronavirus appear to decline in patients quickly after infection. Understanding how to increase selection of antibodies that don’t bind self may illuminate a pathway to long-lived immunity against COVID-19.”