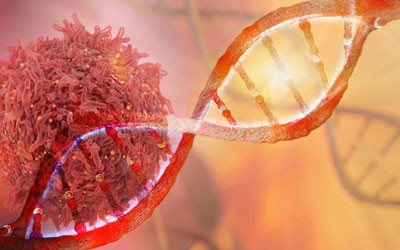 An international team of over 1300 researchers has conducted what is claimed to be the most comprehensive study of whole cancer genomes to date, allowing scientists to search for previously unknown chemicals, biological pathways and environmental agents responsible for causing cancer.

Cancer is caused by genetic changes — mutations — in the DNA of a cell, allowing the cell to divide uncontrollably. Many known causes of cancer, such as UV light and tobacco smoking, leave a specific fingerprint of damage in the DNA, known as a mutational signature. These fingerprints can help understand how cancers develop, and potentially how they can be prevented. However, past studies have not been large enough to identify all potential mutational signatures.

Now, collaborators from the Pan-Cancer Analysis of Whole Genomes (PCAWG) study — also known as the Pan-Cancer Project — have analysed more than 2600 samples from 38 cancer types, ranging from common cancers like colorectal and breast cancers to rare cancer types including pancreatic and brain cancers. Published in the journal Nature, this analysis has enabled the researchers to create what has been described as the first complete atlas of genomes to compare the cancers and find the common mutations between them, providing clues as to how each cancer developed. They even managed to identify new mutational signatures that had not been seen before — from single-letter ‘typo’ mutations to slightly larger insertions and deletions of genetic code.

The PCAWG is the collaborative effort of groups from the International Cancer Genome Consortium (ICGC), who agreed to put thousands of sets of patient genome data together and reanalyse these samples using cloud computing. Professor Sean Grimmond led the Australian effort contingent, which comprised the University of Melbourne, the Peter MacCallum Cancer Centre, QIMR Berghofer, the Garvin Institute, the University of Queensland and the Melanoma Institute of Australia, and contributed approximately 10% of primary samples from a broad range of tumours including pancreatic, melanoma, neuroendocrine and ovarian cancer.

The researchers found on average any given tumour has four to five key mutations that are responsible for driving that disease. Previously researchers were aware of one or two drivers, so having an updated number and realising their complexity in each patient is an important step in working out where else to look when making a diagnosis. Only about half of all the mutational signatures have known causes, so the team’s study could be used to help find more of these causes and better understand cancer development.

Professor Mike Stratton, a senior author of the study and Director of the Wellcome Sanger Institute, said: “Using our detailed catalogue of the range of mutational signatures in cancer DNA, researchers worldwide will now be able to investigate which chemicals or processes are linked to these signatures. This will increase our understanding of how cancer develops and discover new causes of cancer, helping to inform public health strategies to prevent cancer.”

Dr Ludmil Alexandrov, a first author of the study from the University of California San Diego, added: “We identified almost every publicly available cancer genome at the start of this project and analysed their whole genome sequences. The data from these thousands of cancers allowed us to describe mutational signatures in much more detail than ever before, and we are confident that we now know most of the signatures that exist.”

Prof Grimmond, from the University of Melbourne, said the atlas provides a solid foundation to understand which genes and which pathways may be damaged in each cancer type. “This research will help identify what types of genetic test are needed for each cancer type — filling in potential existing gaps that we did not even know were there,” he said.

“It demonstrates better than ever before how similar damage can cause cancer in different tissues — implications mean that for example, a breast cancer drug could be effectively used to treat an oesophageal cancer.”

The atlas also provides insight for challenging cancers where the tissue of origin is not known by identifying patterns of damage across various cancer types. Prof Grimmond explained, “If we don’t understand where a cancer comes from, we can’t even rely on traditional clinical approaches to treatment.”

Having a harmonised dataset enables international researchers to learn from one cancer treatment and applies those findings to another using a cloud computing portal. That said, further research with much larger datasets will be required to enable precision medicine to truly become a reality.

“This work is helping to answer a longstanding medical difficulty: why two patients with what appear to be the same cancer can have very different outcomes to the same drug treatment,” said Dr Peter Campbell, a member of the Pan-Cancer Project steering committee from the Wellcome Sanger Institute.

“We show that the reasons for these different behaviours are written in the DNA. The genome of each patient’s cancer is unique, but there are a finite set of recurring patterns, so with large enough studies we can identify all these patterns to optimise diagnosis and treatment.”

For access to all the open-tier data in the Pan-Cancer Project, visit https://dcc.icgc.org/.