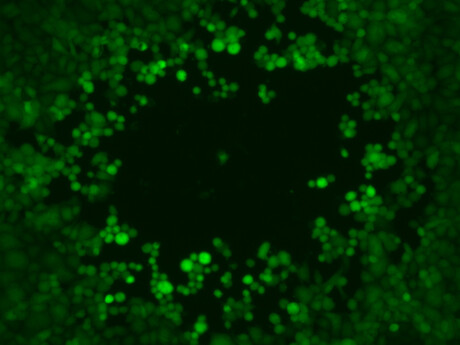 Researchers at the Fraunhofer Institute for Interfacial Engineering and Biotechnology IGB have succeeded in genetically modifying the herpes simplex virus type 1, which triggers painful cold sores, in such a way that it can be used as an effective weapon against tumour cells.

Viruses are simple in structure — they consist of a small amount of genetic material wrapped in proteins and lipids — yet they have the unique ability to hijack living cells and exploit them for multiplication. They often destroy their host cells in the process, and that’s when animals and humans get sick. Professor Susanne Bailer and her team at Fraunhofer IGB have managed to deactivate the genes of the herpes virus that cause disease, thus rendering it suitable for treatment.

The genetic material of the herpes virus consists of DNA, not RNA as in the case of the SARS-CoV-2 coronavirus, for example. As explained by Bailer, “The DNA genome is much larger than the RNA genome, meaning that numerous additional genes can be accommodated there. So when we’re looking to reprogram the virus, we have a lot of genes at our disposal.”

A further advantage here is that the core technologies that can be used to genetically modify herpes viruses already exist, with significant progress having been made over the past few years. The AstraZeneca COVID-19 vaccine is based on adenoviruses, which cause colds in chimpanzees but are harmless to humans. The modified viruses pass the information required to develop vaccine antigens into human cells, at which point SARS-CoV-2-specific antibodies are formed. Bailer and her team have now succeeded in improving the genetic engineering methods used to manipulate the herpes viruses, thus allowing them to incorporate a target control.

“This ensures that our viruses enter cancerous cells when we inject them directly into the tumour, rather than healthy ones. They then multiply and cause the cells to burst,” Bailer said. This process releases tumour markers that enable the body’s own immune system to fight the cancer.

“In addition, we activate the immune response with specific proteins that our viruses release when they reproduce. The immune system then recognises the tumour cells and eliminates them.”

Bailer is also hoping to use this process to combat undetected metastases outside the tumour site, saying, “The immune system is the most powerful weapon we have to fight cancer. Using our virus and the released tumour markers, we are aiming to stimulate the immune system in a targeted way so that the body can basically treat itself.” 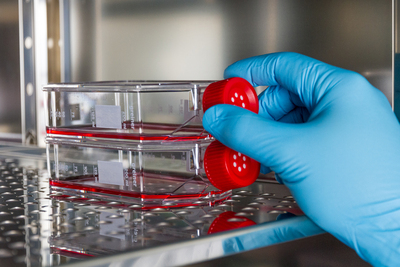 For experimental purposes, the programmable herpes simplex virus is propagated in cell cultures in an incubator. Image ©Fraunhofer IGB

Initial preclinical tests were carried out by the Fraunhofer IGB team as part of the TheraVision project, in cooperation with the Fraunhofer Institutes for Cell Therapy and Immunology IZI, for Toxicology and Experimental Medicine ITEM, and for Silicate Research ISC. The researchers engineered their virus specifically for use in the treatment of non-small-cell lung cancer, which has a particularly high mortality rate. The results of the studies were promising; the tumour cells were successfully eliminated, and the viral immunotherapy may also be effective against metastases.

The herpes simplex virus has another advantage over other viruses — we can press an ‘emergency stop button’. If unforeseen side effects occur during the treatment of weakened cancer patients, there is a reliable way of stopping the viral multiplication process using an extremely effective antiviral drug that has been tried and tested for almost 50 years. However, further studies will need to be carried out before it can be used in clinical settings.

“We need to better understand the mechanisms of action to unlock the full potential of viral immunotherapy,” Bailer said. “In any case, we have now developed a viral platform technology that can be used for other types of tumours in the future.”

Top image caption: Plaque formation of cell culture cells by an engineered, green fluorescent herpes simplex virus 1. When a single virus multiplies, a lysis site (plaque) is formed locally, which glows at the edges on account of the cells that are still alive. Image ©Fraunhofer IGB