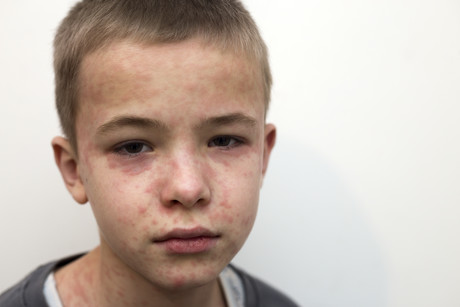 Two groups of researchers have demonstrated how measles causes long-term damage to the immune system, leaving people vulnerable to other infections — and pointing to the importance of vaccination in order to combat such infections.

The measles virus causes coughing, rashes and fever, and can lead to potentially fatal complications including pneumonia and encephalitis (inflammation of the brain). Measles leads to more than 100,000 deaths per year worldwide in unvaccinated communities.

Before the introduction of the measles vaccine in the 1960s, nearly every child experienced measles infection. Vaccination has helped lead to an 80% reduction in measles cases between 2000 and 2017, saving an estimated 21.1 million lives.

However, because of a combination of anti-vaccination campaigns, non-vaccinating religious communities and limited access to the vaccine, measles continues to affect more than seven million people annually worldwide, causing upwards of 100,000 deaths. Reduced vaccination alone has led to a nearly 300% increase in measles infections since 2018, with the UK and some European countries losing their WHO elimination status for measles earlier this year.

Even Australia is not immune (pun not intended) to the effects of the disease, despite having retained its WHO elimination status since 2014. This is because it took around 30 years from the introduction of the measles vaccine for a second dose to be introduced into vaccination schedules, meaning many citizens are not fully protected — and that could be a problem if they travel to a country where this highly contagious disease is prevalent.

To help estimate the impact of vaccination, two groups of researchers investigated the hypothesis that measles can instigate immune suppression, which can persist for months to years even after the disappearance of visible symptoms, like the characteristic measles rash. This hypothesis has already been supported by previous studies, including evidence that associates measles with up to 50% of childhood deaths from infectious diseases.

But while it was known that measles weakens the immune system, even after the initial infection has cleared, precisely how this post-measles immune suppression unfolded in humans was unclear. During a measles infection, people have fewer white blood cells, which protect the body against disease. After a few weeks, the patient’s white blood cell count goes back up to previous levels and they have recovered from the measles, yet they remain susceptible to other infectious diseases.

In 2013, Velislava Petrova from the Wellcome Sanger Institute collaborated with colleagues throughout the UK and Europe to sequence antibodies produced by B cells — one of the primary immune cells able to recognise a virus and deploy attacks against it — from 77 unvaccinated children from three Orthodox Protestant schools in the Netherlands. Blood samples were taken from healthy volunteers from this community, who were followed up for repeat sampling several weeks after a measles outbreak in 2013. The results of the study were published in the journal Science Immunology.

By comparing the children’s B cell data before and after measles infection, the researchers identified two indications of immune suppression from measles: incomplete restocking of the B cell pool and compromised immune memory due to depletion of B cell clones. The team discovered that specific immune memory cells that had been built up against other diseases, and were present before the measles virus infection, had disappeared from the children’s blood — leaving them vulnerable against infectious diseases to which they had previously been immune.

“This study is a direct demonstration in humans of ‘immunological amnesia’, where the immune system forgets how to respond to infections encountered before,” said Petrova. “We show that measles directly causes the loss of protection to other infectious diseases.”

The researchers then tested this ‘immunological amnesia’ directly in ferrets, showing that infection with a measles-like virus reduced the level of flu antibodies in ferrets that had been previously vaccinated against flu. These ferrets also had worse flu symptoms when infected with flu virus after the measles-like infection, suggesting that measles can reverse the effects of vaccination against this and other infectious diseases.

The team also found that the measles virus resets the immune system to an immature state that can only make a limited repertoire of antibodies against disease. This means that measles makes it difficult for the immune system to respond to any new infections, increasing the risk of secondary diseases. Some children still show signs of immune suppression for up to five years, although they appear healthy when their white blood cell counts are measured.

“For the first time we see that measles resets the immune system and it becomes more baby-like, limiting how well it can respond to new infections,” said senior author Professor Colin Russell, from the University of Amsterdam. “In some children the effect is so strong it is similar to being given powerful immunosuppressive drugs.”

Further analysis of the unvaccinated children was conducted by Stephen Elledge from the Howard Hughes Medical Institute (HHMI), who collaborated with colleagues from the US and Finland to assess the responses of antibodies in the children before and after measles infection. Their contribution was published in the journal Science.

In 2015, Michael Mina from HHMI released a report suggesting that measles might suppress infected people’s immune systems for two to three years, making them susceptible to other diseases. Researchers had hypothesised that measles might cause a kind of ‘immune amnesia’, where the body forgets the pathogens it had already seen. But no-one had rigorously tested the idea, said study co-author and HHMI investigator Stephen Elledge.

At the same time, Elledge and his team had developed virus-detecting technology called VirScan, which identifies all the viruses that have infected an individual using just a single drop of blood. VirScan can detect antibodies to HIV, influenza, herpes and hundreds of other viruses — but the scientists had a hard time finding measles antibodies, which led them to suspect that levels might be too low to detect in people who had been long since vaccinated.

Elledge and graduate student Tomasz Kula teamed up with Mina, now an epidemiologist at Harvard University, and Rik de Swart, of the Erasmus University Medical Center — the latter of whom had helped collect the blood samples for Petrova’s study into unvaccinated children back in 2013. Elledge analysed these samples using VirScan, and this time his team had no trouble seeing measles antibodies. But they also noticed something else: the children’s other antibodies seemed to be disappearing.

After measles infection, the collection of antibodies children had built up over their lifetime shrank — sometimes drastically. Depending on whether the infection was mild or severe, kids lost 33 or 40% of their total antibody collection. As Elledge put it, “When measles hits, antibodies just go away” — a phenomenon that explained the epidemiological observations of immune amnesia Mina made in 2015.

The researchers repeated the experiment in four macaque monkeys — this time collecting blood samples before and up to five months after infection. The monkeys lost, on average, 40 to 60% of the antibodies that protect them from other pathogens. Elledge thinks his team may have seen similar numbers in the children had the team tested them again later, as it takes time for antibodies to fade from the blood.

Without these antibodies, children lose much of their immune defences and become vulnerable to viruses they’ve already met and conquered, as well as diseases they had already been vaccinated against. And though rebuilding the antibody repertoire is possible through re-exposure to the pathogens, this could take months or years and might pose several health risks, the researchers said.

The two studies thus provide a clear explanation for why children often catch other infectious diseases after measles. For Elledge, the message of the research is clear: “Vaccinate your kids.”