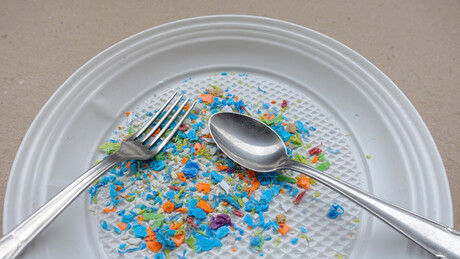 Dutch researchers have demonstrated that minuscule pieces of plastic from our living environment are absorbed into the human bloodstream, publishing their results in the journal Environment International.

The researchers from VU Amsterdam, Deltares and Amsterdam UMC developed an analytic method for establishing the trace level of micro- and nanoplastic particles (MNPs) in human blood, which was applied to the blood of 22 anonymous donors. Nanoplastics are defined as being less than 0.001 mm in size, while microplastics, at 0.001–5 mm, are to some extent still visible to the naked eye.

Three-quarters of the test subjects appeared to have plastics in their blood, proving that plastic particles can end up in the human bloodstream. The overall concentration of plastic particles in the blood of the 22 donors amounted to an average of 1.6 µg/mL, which is comparable to a teaspoon of plastic in 1000 L of water (10 large bath tubs). Polyethylene terephthalate (PET), polyethylene and polymers of styrene were the most common types of plastic found in the blood samples, followed by poly(methyl methacrylate); polypropylene was also analysed but the concentrations were too low for an accurate measurement.

“This dataset is the first of its kind and must be expanded to gain insight into how widespread plastic pollution is in the bodies of humans, and how harmful that may be,” said analytical chemist Marja Lamoree, from VU Amsterdam. “With this insight, we can determine whether exposure to plastic particles poses a threat to public health.”

Separately to this, researchers from the Medical University of Vienna revealed that 5 g of MNPs on average enter the human gastrointestinal tract per person per week — roughly equivalent to the weight of a credit card. While the health risk of ingested MNPs is largely unknown to date, the researchers summarised the current state of scientific knowledge in a review article for the journal Exposure and Health.

MNPs enter the food chain from packaging waste, among other sources, and are trafficked into the body via food such as marine life and sea salt. Drinking also plays a part, with one study showing that anyone who drinks 1.5 to 2 L of water a day from plastic bottles ingests around 90,000 plastic particles per year in this way alone; those who choose tap water can, depending on their geographical location, reduce the amount ingested to 40,000 plastic particles. The researchers also demonstrated widespread contamination of mineral water with xenohormones leached from PET bottles, known to exhibit oestrogenic activity which can act carcinogenic in the body.

Experimental studies indicate that ingested MNPs passing through the gastrointestinal tract lead to changes in the composition of the gut microbiome; such changes are associated with the development of metabolic diseases such as diabetes, obesity or chronic liver disease. In addition to the effects on the gut microbiome, the scientists also described specific molecular mechanisms that facilitate the uptake of MNPs into gut tissue. Analysis showed that MNPs in the gastrointestinal tract could increasingly be taken up into tissue under certain physicochemical conditions and activate mechanisms involved in local inflammatory and immune responses. Nanoplastics in particular are associated with biochemical processes that are crucially involved in carcinogenesis.

According to study co-author Lukas Kenner, the potential adverse health effects of plastic particles could be particularly impactful for people with a chronic disease burden. “A healthy gut is more likely to ward off the health risk,” he said. “But local changes in the gastrointestinal tract, such as those present in chronic disease or even negative stress, could make them susceptible to the harmful effects of MNPs.”