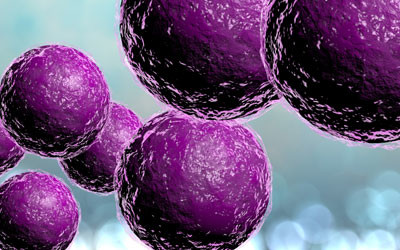 Natural antibiotics may be more effective than their synthetic counterparts at remaining effective in the wake of antibiotic resistance — although that doesn’t mean they can’t be given a helping hand along the way.

The development of antibiotics is one of medicine’s great success stories — but many experts fear that we could soon enter an era without antibiotics, because more and more of the available drugs are losing their effect due to resistance. Yet antibiotics were not invented by the pharmaceutical industry, noted Birgit Schittek from the University of Tübingen: “Indeed, numerous bacteria produce these active agents naturally, and have probably done so over long periods of evolution, without loss of effectiveness.”

Three years ago, Tübingen researchers discovered that the natural antibiotic lugdunin can disrupt the energy balance of pathogenic bacteria and kill them. Writing recently in the journal Angewandte Chemie, they revealed that benign bacteria on the human nasal mucosa produce lugdunin to deter the pathogen Staphylococcus aureus.

“[But] why lugdunin remains highly effective to the present day was a complete mystery,” Schittek said.

Now, the researchers have discovered that Lugdunin not only has a direct antimicrobial effect on S. aureus, it also has two completely unexpected properties, as explained by Tübingen researcher Andreas Peschel.

“Firstly, it works in combination with antimicrobial peptides that make up our human cells,” he said. This increases its efficacy and hinders the development of resistance.

“Secondly, it binds with a human receptor protein called TLR2. This stimulates the immune cells and activates the immune response in such a way that S. aureus has no chance of becoming established and causing infections.”

Writing in the journal Nature Communications, Schittek and Peschel stated that a natural antibiotic such as lugdunin — which attacks on several levels, more or less independent of one another — is better at preventing resistance than a chemically produced substance that has only a single target in the bacterial cell. The German Center for Infection Research (DZIF) is now further developing lugdunin so that it can be used for treatments in the future, and it is hoped that the research will help scientists develop drugs that work with similar effectiveness.

Meanwhile, researchers at the University of Tokyo have identified their own drug candidates to treat antibiotic-resistant infections, including the superbug MRSA (methicillin-resistant Staphylococcus aureus), by artificially enhancing a natural product. Their work has also been published in Nature Communications.

The researchers first identified the natural antibiotic from a soil sample collected in the subtropical island of Okinawa in south-western Japan. First described in the journal Nature Chemical Biology, the antibiotic — called lysocin E — is said to have a unique mechanism of killing bacteria compared to the currently available classes of antibiotics, making it an order of magnitude more potent than the current drug used against MRSA, vancomycin.

Lysocin E has a complex chemical structure that resembles a tambourine: a large ring with 12 short side chains. The amino acids that form those chains each contribute to the overall function of the entire molecule. Swapping the naturally occurring amino acids for different ones could enhance the function of the antibiotic, the researchers hypothesised.

“We try to find the improvements that natural selection did not make yet,” said Assistant Professor Hiroaki Itoh.

The scientists focused on four side chains and tested how seven different amino acids might enhance lysocin E’s antibacterial activity. All possible combinations of the four side chains and seven amino acids meant they needed to build 2401 different synthetic versions of modified lysocin E. Few researchers have done this before because many naturally occurring molecules are difficult to build synthetically, according to Itoh — but using a technique known as one-bead-one-compound library strategy, or split-and-mix synthesis, the Tokyo researchers are able to build thousands of new molecules in a single synthesis.

Once all 2401 modified lysocin E were built, the researchers tested if they retained the natural version’s unique method of killing bacteria. Only 22 modified lysocin E were selected for the final round of tests to measure how effective they were at killing six common bacteria; of those, 11 showed antimicrobial activity better or equal to the original lysocin E.

The researchers will now study the three most potent modified lysocin E built — each said to be four times more effective at killing bacteria than their natural predecessor — to verify their effectiveness at treating infections in non-human animal models and to understand the detailed mechanism of how they kill bacteria at such low doses. They believe their method of synthetically enhancing natural products can increase the speed of early-stage drug discovery and help maximise the potential of naturally occurring complex molecules.

“Potentially, our method could be used to find other drug candidates based on promising small protein natural products, including for anticancer or antivirus,” Itoh said.