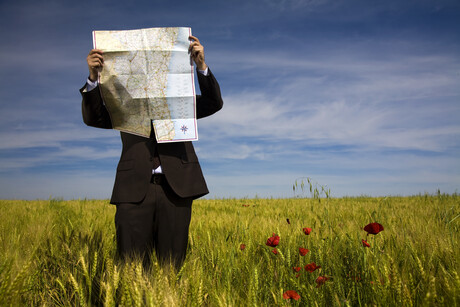 A previously unknown kind of human brain cell appears to help people centre themselves in their personal maps of the world, according to a new study from US and German neuroscientists.

Their discovery sheds light on the cellular mechanisms underlying navigation and memory in humans, as well as what parts of the brain might get disrupted during the kinds of memory impairments common in neurodegenerative diseases such as Alzheimer’s. It has been published in the journal Neuron.

There are two strategies with which humans and animals navigate and orient themselves. One involves locating places, distances and directions in ‘allocentric’ or other-centred frames of reference rooted in the external world. The other strategy involves ‘egocentric’ frames of reference that are centred on the self.

Whenever you use a mobile phone app to find driving directions, it will likely employ both these modes of navigation. When you first type in an address, it will normally show you the address on a map from an allocentric perspective, with north at the top and south at the bottom. When you then go to route view, it will switch to an egocentric perspective where ‘ahead’ is at the top and ‘behind’ is at the bottom.

Scientists first discovered brain cells linked with allocentric frames of reference in rats in 1971 — ‘place cells’ that may, for example, indicate that one is located in the north-east corner of an area. Other allocentric spatial cell types include head-direction cells that may activate whenever one is navigating south, or border cells that may respond when a boundary is located to the west.

In the past decade, researchers began investigating how rat brains mapped egocentric frames of reference. Two years ago, scientists at Dartmouth College in the US identified a brain region in rats called the postrhinal cortex in which egocentrically tuned cells are abundant. However, it remained poorly understood what brain cells formed the basis of egocentric spatial maps in humans.

“In humans it is only rarely possible to directly record the activity of single neurons from the brain, due to ethical reasons,” said Lukas Kunz, a postdoctoral research scientist at Columbia University’s Department of Biomedical Engineering and first author of the new study. “There are techniques like fMRI or EEG, which allow us to indirectly measure neural activity from healthy human brains, but this neural activity reflects the sum activity of millions of neurons, which does not allow for direct conclusions about the working principles of single neurons.

In the new study, neuroscientists from the US and Germany investigated 15 epilepsy patients at the University Medical Center Freiburg. These volunteers were implanted with electrodes to help doctors monitor their disorder.

The researchers asked the volunteers to perform computer tasks that explored their ability to navigate through virtual environments and to remember where many different objects were located there. At the same time, the scientists recorded the activity of more than 1400 single neurons in multiple brain regions across all the participants.

The scientists identified more than 160 neurons that behaved like egocentric spatial cell types, activating when specific parts of the virtual environment were ahead, behind, to the left or to the right of the patients, or when points in space were close to or far away from the patients.

“We are now the first to report egocentric spatial cell types in humans,” Kunz said.

In the new study, patients had to perform a number of different tasks in virtual reality to help scientists better understand how the brain forms a map of the world. Video credit: Lukas Kunz.

These ‘egocentric bearing cells’ likely encode spatial information on a mental map centred on each person. “This is presumably important for everyday life, when humans try to orient themselves in their environments and when they navigate along routes,” said Joshua Jacobs, Associate Professor of Biomedical Engineering at Columbia Engineering and senior author of the study.

The researchers also found these egocentric bearing cells showed increases in activity when the patients used their memory to successfully recall the locations of objects they had found in the virtual environments. “This suggests these cells are not only relevant for navigation, but also play a role in correctly remembering past experiences,” Kunz said.

“Memories consist of multiple different elements, such as a specific event, the place where the event happened and the time when the event happened. We believe that there are different neural systems for the different components of these memories. Egocentric bearing cells are presumably particularly involved in processing the spatial information of the memories.”

The team’s findings may illuminate what might go wrong in people with memory deficits, including patients with neurodegenerative diseases such as Alzheimer’s, with Jacobs suggesting: “Their egocentric bearing cells may not function correctly, or may have been destroyed for some reason, such as a stroke, a brain tumour or dementia.” The new findings do not answer how one might deal with such memory impairments, however.

In the future, the researchers want to see why exactly any given egocentric bearing cell is tuned to whatever point in space it is focused on. Currently, Kunz and his colleagues assume that multiple different spatial cues, such as objects, spatial boundaries and landmarks, combine to influence the position of these reference points. The scientists can examine the influence these cues have on the location of these reference points by removing these cues from environments during experiments.