Preventing the spread of pancreatic cancer 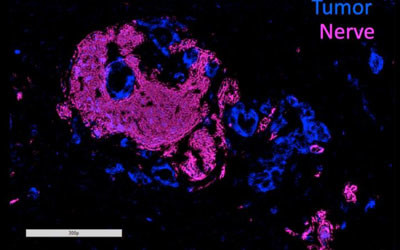 Two separate studies have uncovered explanations for why pancreatic cancers are so difficult to contain — and suggested innovative new methods to combat this.

Pancreatic cancer is one of the most lethal forms of cancer, with a five-year survival of ~9% in Australia. The main reason for the cancer’s poor prognosis is metastasis — the process by which cancers grow and spread to distant organs. Many patients already have metastatic disease at diagnosis, as pancreatic cancers often show no obvious signs or symptoms in their early stages; those who don’t typically die of metastatic disease even after local disease has been ostensibly controlled by surgery and radiation.

Most cases of pancreatic ductal adenocarcinoma (PDA), the most common type of pancreatic cancer, are marked by a process called perineural invasion (PNI), in which tumours grow into nearby nerves. Although it’s been well established that PNI is an accurate sign of poor prognosis and decreased survival, why it occurs and whether it’s connected with metastasis has been unclear.

To investigate these questions, Associate Professor Lei Zheng and his colleagues at the Johns Hopkins Kimmel Cancer Center in the US used human and mouse cell lines to look closely at axon guidance proteins — a family of biochemical molecules frequently found to be genetically altered in PDA. Published in the journal Gastroenterology, their work focused further on two of these proteins — SEMA3D and its target, PLXND1 — both of which are involved in growing the long extensions of nerve cells, called axons. Assoc Prof Zheng’s own laboratory research has shown that PDA cells often produce SEMA3D in abundance.

The colleagues made similar findings when they blocked PLXND1, the receptor for SEMA3D, on nerve cells in laboratory models of human pancreatic cancer cells — according to first author Noelle Jurcak, the cancer cells simply weren’t as attracted to the nerves. In addition, when the researchers genetically altered mice to reduce the amount of PLXND1 that their nerves produced, they made what they said was a stunning finding: not only did fewer nerves grow around tumour cells, but the animals displayed a sharp decline in metastasis, suggesting that PNI is critical for metastatic PDA growth.

The researchers confirmed the critical role of these molecules in human PDA cells. In pancreatic cancer tissue samples taken from patients, they found that tumours and nearby nerves that expressed low amounts of SEMA3D and PLXND1 were 10 times more likely to be situated further apart, and that those with high amounts of these proteins were associated with high levels of PNI.

According to Assoc Prof Zheng, the findings suggest that SEMA3D and PLXND1 play crucial roles in PNI and PDA metastasis; the researchers hope they may eventually be able to develop medications that target these two molecules so as to stem cancer-related pain by keeping PNI in check. Targeting SEMA3D and PLXND1 may also help prevent or slow metastasis, he added.

Prof Zheng cautioned that it’s still unclear precisely how these molecules are involved in cancer spread, but said one possible explanation is that pancreatic cancers conceal themselves in nearby nerves even after the primary tumour is removed. If so, new surgical strategies or medications could help slow the spread of PDA and related cancers, improving their low survival rate.

“Our next step is to see whether we can demonstrate that nerves become a niche to host invaded tumour cells,” Assoc Prof Zheng said. “If tumour cells are hiding there, that could become a source of recurrence.”

Meanwhile, an international team of researchers led by Sydney’s Garvan Institute of Medical Research has discovered that some pancreatic tumours produce more of a molecule called ‘perlecan’ to remodel the environment around them, which helps cancer cells spread more easily to other parts of the body and also protects them against chemotherapy. Their work was published in the journal Nature Communications.

The team investigated why some pancreatic cancers spread while others appear to stay in one place, comparing the tissue around tumour cells in both metastatic and non-metastatic pancreatic cancers. This tissue — known as the ‘matrix’ — acts like a glue that holds different cells in an organ or in a tumour together.

“This means that in a growing tumour, even a small number of aggressive metastatic cells — a few bad apples — can help increase the spread of other, less aggressive cancer cells.”

“What we discovered is a previously unknown set of matrix molecules that aggressive pancreatic cancer cells use to shape the tissue around them, in order to both protect them from chemotherapy and enable easier escape around the body,” said Dr Thomas Cox, who co-led the study.

Using gene-editing techniques, the researchers reduced the levels of one of the molecules (perlecan) in mouse models of aggressive metastatic pancreatic cancer. Through advanced live imaging techniques, the team tracked individual cancer cells and revealed that lowering the levels of perlecan not only reduced the spread of cancer cells, but that tumours also responded better to chemotherapy.

“We believe that there would be important benefit in targeting the fibroblasts of a tumour in combination with targeting the cancer cells themselves with chemotherapy,” said Dr Vennin. “If we can specifically target the aggressive fibroblasts in patients harbouring precise genetic changes, we can make them more susceptible to our currently approved treatments, which would significantly change how we treat this aggressive cancer.”

The researchers say that targeting perlecan, or other matrix molecules that help remodel the tissue of metastatic tumours, may be effective for not just pancreatic cancer but also for prostate and breast cancers.

“What we’ve discovered in this study is a two-pronged approach for treating pancreatic cancer that we believe will improve the efficiency of chemotherapy and may help reduce tumour progression and spread,” said study co-leader Associate Professor Paul Timpson.

“Most cancer therapies today aim to target cancer cells themselves. The environment of tumours is a potential untapped resource for cancer therapy and one which we intend to explore further.”