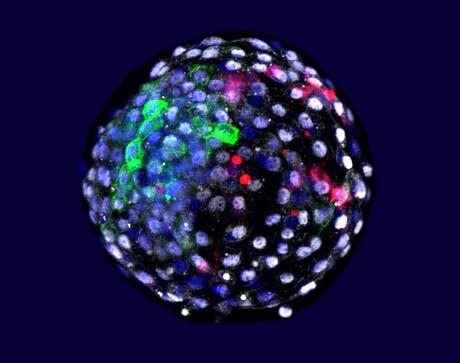 The ability to grow the cells of one species within an organism of a different species offers scientists a powerful tool for research and medicine, yet developing such capabilities has been a formidable challenge. US and Chinese researchers, led by Professor Juan Carlos Izpisua Belmonte from the Salk Institute for Biological Sciences, have now come one step closer towards this goal by realising the integration of human cells into animal tissue.

Published in the journal Cell, the team’s new study builds on Prof Izpisua Belmonte’s work to take the next step in chimeric organisms — organisms that contain cells from two or more species — to understand a host of diseases and address the severe shortage in donor organs. As part of the study, the scientists injected human stem cells into primate embryos and were able to grow chimeric embryos for up to 19 days.

The World Health Organization (WHO) estimates that the 130,000 organ transplants performed every year represent only 10%, which is exacerbated by a shortage of available organs. Researchers have hoped that growing human cells in pig tissue — whose organ size, physiology and anatomy are similar to humans’ — could alleviate this problem.

In a 2017 Cell study, Prof Izpisua Belmonte’s group reported groundbreaking work in which they incorporated human cells into early-stage pig tissue, marking the first step towards producing transplantable human organs using large animals. But the contribution of human cells was fairly low, which could be due to the large evolutionary distance (90 million years) between the two species. So Prof Izpisua Belmonte set out to investigate chimera formation in a more closely related species: macaques.

While these types of chimeras with macaques wouldn’t be used for human organ transplants, they nevertheless reveal invaluable information about how human cells develop and integrate, and how cells of different species communicate with one another. Prof Belmonte likens the process of two types of cells integrating to communicate with different languages: human cells in pig tissue was akin to the cells trying to find common ground between Chinese and French, for example, whereas human cells in macaques operated more like two closely related languages, like Spanish and French. By better understanding the molecular pathways involved in this interspecies communication, researchers could ultimately improve the integration of human cells into more suitable hosts, such as pigs, that could be used in regenerative medicine, as well as better understanding the ageing process.

The study was made possible when Prof Belmonte’s team — collaborating with Weizhi Ji of Kunming University of Science and Technology in China — generated technology that allowed macaque embryos to stay alive and grow outside the body for an extended period of time, with the results published in the journal Science. In the present study, six days after the monkey embryos had been created in petri dishes, each one was injected with 25 human cells that had been tagged with a fluorescent protein. The cells were from an induced pluripotent cell line known as extended pluripotent stem cells, which have the potential to contribute to both embryonic and extra-embryonic tissues.

Through immunofluorescent studies, in which antibodies bind to the fluorescently tagged stem cells, the scientists observed that human stem cells survived and integrated with better relative efficiency than in the previous experiments in pig tissue. After one day, human cells were detected in 132 embryos; after 10 days, 103 of the chimeric embryos were still developing; and by day 19, only three chimeras were still alive. Importantly, the percentage of human cells in the embryos remained high throughout the time they continued to grow.

“Historically, the generation of human–animal chimeras has suffered from low efficiency and integration of human cells into the host species,” Prof Belmonte said. “Generation of a chimera between human and non-human primate, a species more closely related to humans along the evolutionary timeline than all previously used species, will allow us to gain better insight into whether there are evolutionarily imposed barriers to chimera generation and if there are any means by which we can overcome them.”

To identify the molecular communication pathways between the two species’ cells in the current study, Prof Belmonte’s team analysed the chimeric transcriptome, a readout of which genes and molecules are active, for both the human and monkey cells. They observed that cells from chimeric tissue had distinct transcriptomic profiles from controls and detected several communications pathways that were strengthened or novel in the chimeric cells.

“From these analyses, several communication pathways that were either novel or strengthened in the chimeric cells were identified,” Prof Belmonte said. “Understanding which pathways are involved in chimeric cell communication will allow us to possibly enhance this communication and increase the efficiency of chimerism in a host species that’s more evolutionarily distant to humans.”

Once this molecular communication is further understood, chimeric organisms could allow researchers an unprecedented glimpse into the earliest stages of human development. Chimeric organisms containing human cells could be used to generate cells and organs for transplantations in host species more evolutionarily distant to humans, like pigs, that might be more appropriate for various reasons (social, economic and ethical, among others).

Additionally, these studies constitute a new platform to study how specific diseases arise. For instance, a particular gene that may be associated with a certain cancer could be engineered in a human cell. Then, observing the course of disease progression using those engineered cells in a chimeric model might reveal more applicable results than a typical animal model in which the disease might take a different course. Chimeric models of disease could also be used to test the efficacy of drug compounds and obtain results that could similarly better reflect the response in humans.

“As we are unable to conduct certain types of experiments in humans, it is essential that we have better models to more accurately study and understand human biology and disease,” said Prof Belmonte. “An important goal of experimental biology is the development of model systems that allow for the study of human diseases under in vivo conditions.”

Another research avenue where chimerism could offer unique insights is ageing. Prof Belmonte said researchers don’t know if organs age at the same rate or if perhaps one organ drives the ageing of all the other organs and acts as a master switch for the ageing process. Using chimerism to grow, for example, the organ of a common rat in a much longer-lived species like the naked mole rat, scientists could begin to probe which organs may be key to ageing and what signals are involved in their survival.

“These chimeric approaches could be really very useful for advancing biomedical research not just at the very earliest stage of life, but also the latest stage of life,” Prof Belmonte said.

US researchers have discovered that a gene called GAS2 plays a key role in normal...