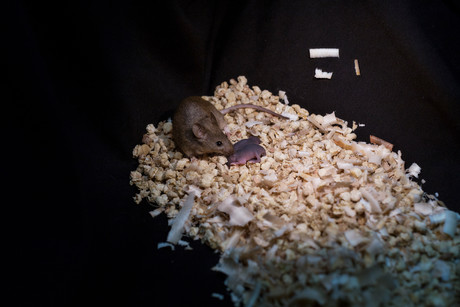 Researchers from the Chinese Academy of Sciences have produced healthy mice with two mothers that went on to have normal offspring of their own.

The researchers were examining what makes it so challenging for mammals of the same sex to reproduce and found that some of these barriers can be overcome using stem cells and targeted gene editing.

Mice from two fathers were also born using a similar but more complex approach, but they only survived for a couple of days.

The authors note that there are still obstacles to using these methods in other mammals. Findings have been published in the journal Cell Stem Cell.

"We were interested in the question of why mammals can only undergo sexual reproduction. We have made several findings in the past by combining reproduction and regeneration, so we tried to find out whether more normal mice with two female parents, or even mice with two male parents, could be produced using haploid embryonic stem cells with gene deletions," said co-senior author Qi Zhou.

While some reptiles, amphibians and fish can reproduce with one parent of the same sex, it's challenging for mammals to do the same even with the help of fertilisation technology. In mammals, because certain maternal or paternal genes are shut off during germline development by a mechanism called genomic imprinting, offspring that don't receive genetic material from both a mother and a father might experience developmental abnormalities or might not be viable. By deleting these imprinted genes from immature eggs, researchers have produced bimaternal mice — mice with two mothers — in the past. "However, the generated mice still showed defective features, and the method itself is very impractical and hard to use," Zhou said.

To produce their healthy bimaternal mice, Zhou, co-senior author Baoyang Hu, co-senior author Wei Li and their colleagues used haploid embryonic stem cells (ESCs), which contain half the normal number of chromosomes and DNA from only one parent and which the researchers believe were the key to their success. The researchers created the mice with two mothers by deleting three imprinting regions of the genome from haploid ESCs containing a female parent's DNA and injected them into eggs from another female mouse. They produced 29 live mice from 210 embryos. The mice were normal, lived to adulthood and had babies of their own.

One advantage of using haploid ESCs is that even before the problematic genes are knocked out, they contain less of the imprinting programming that ultimately causes maternal- or paternal-specific genes to be expressed. "We found in this study that haploid ESCs were more similar to primordial germ cells, the precursors of eggs and sperm. The genomic imprinting that's found in gametes was 'erased'," Hu said.

Twelve live, full-term mice with two genetic fathers were produced using a similar but more complicated procedure. Haploid ESCs containing only a male parent's DNA were modified to delete seven key imprinted regions. The edited haploid ESCs were then injected — along with sperm from another male mouse — into an egg cell that had its nucleus, and therefore its female genetic material, removed. This created an embryo containing only genomic DNA from the two male parents. These embryos were transferred along with placental material to surrogate mothers, who carried them to term.

These pups survived 48 hours after birth, but the researchers are planning to improve the process so that the bipaternal mice live to adulthood. Similar results were achieved in 2011, but using a method that relied on a female intermediary produced from the first father's stem cells to mate with the second father. That method sidestepped the problem of genomic imprinting but presents ethical and practical hurdles if this technology were to ever be considered for humans.

Li notes that there are still obstacles to using these methods in other mammals, including the need to identify problematic imprinted genes that are unique to each species and concerns for the offspring that don't survive or that experience severe abnormalities. They do hope, however, to explore these techniques in other research animals in the future.

Too far, too fast?

Professor Bob Williamson, Chair of the board of Stem Cells Australia and Scientific Director, Yulgilbar Alzheimer's Research Program, University of Melbourne said, "If the research is reproducible, and also works in humans, it still has to be shown to be safe. In Australia, there are both legal prohibitions and ethics committees that would ensure these techniques could not be used for human reproduction. The experiments are, however, important, because they may shine a light on some causes of serious handicap in children."

This research does illustrate how quickly research with stem cells is moving, he said. Everyone, whether they feel enthusiastic or worried about these new techniques, will be thinking: surely, we should have an ethics group that studies this, and can advise the government if these changes are moving too far, too fast, according to Williamson.

"This is an interesting paper following up on a longstanding question of developmental biology — why is it that in mammalian newborns you need to have equal genetic contributions from both a mother and a father, whereas elsewhere in the animal kingdom, it is possible to create (for example), chickens, komodo dragons and sharks without a genetic contributions from a father?,” said Dr Tim Hore, Senior Lecturer, Department of Anatomy, University of Otago.

"It turns out that mammals express some of their genes only from mother's DNA, and some only from father's DNA. Around 100 genes are affected by this peculiar form of parent-gene expression, and because some of the affected genes are essential for proper growth and development, you need to have DNA from both mother and father in order to create healthy mammalian offspring," said Hore.

"Mice with two mothers were created in the early 2000s (Kono et al., 2004), however, what makes this achievement unique is the range of technology used — the researchers cleverly combined gene editing and the production of stem cells from only one parent (known as 'haploid' stem cells). Yet, the work does fall short of creating mammalian offspring from the same sex in the absence of substantial genetic modification, meaning it is unlikely to be useful in humans — for now.

"In order for same-sex parents to both have genetic contributions to their children in an assisted reproduction setting, it is likely another technological leap will be required. One possible approach is using 'epigenetic-editing' on haploid stem cells, essentially reprogramming the DNA of one parent so it looks like that of the opposite sex without altering any genetic sequence."

This process of reproduction by same-sex parents is not normally possible in mammals due to a phenomenon known as 'imprinting', whereby certain genes are turned on or off depending on whether they come from the mother or father, said Holm. "If these 'gene dosage' effects are not tightly controlled it can be catastrophic for the embryo, resulting in birth defects or death.

"In this study, some of the key imprinted DNA regions were removed by gene editing, resulting in healthy female mice but males that died shortly after birth.

"The major impact of this work is the furthering of our fundamental understanding of how imprinting operates in mammals and how it acts as a barrier to uniparental reproduction.

"In the long term, this knowledge may help researchers improve assisted reproductive technologies for infertile couples where disturbances in imprinting may contribute to the health of artificially fertilised embryos. It may even lead to the development of ways for same sex couples to reproduce healthy children of their own. However, it is important to note that the current work was carried out in mice and involved a number of genetic modifications in embryonic stem cells.

"Therefore, this kind of approach in humans carries significant ethical and safety concerns that would need to be overcome if it was to move beyond the laboratory," Holm said.

Robert Norman, Director, Robinson institute and Professor, Reproductive and Periconceptual Medicine, University of Adelaide said, "This approach is still not perfect but may lead to successful outcomes for endangered species of animals and possibly better experimental research animals.

"The concept is intriguing for human reproduction, particularly for same-sex couples, but there are far too many uncertainties at present to attempt such an approach for many years to come.

"The first challenge will be to make babies from artificially derived eggs and sperm from male and female couples, an exercise that is increasingly important for infertile men and women who have no functioning gametes of their own. No ethical permission has been given anywhere to attempt to produce live offspring although embryos have been produced experimentally with no transfer to the uterus."

Megan Munsie, Deputy Director of the Centre for Stem Cell Systems at The University of Melbourne and Head of Engagement, Ethics and Policy at Stem Cells Australia, said, "At a technical level, significant refinements will need to be made to avoid growth abnormalities and other complications. It is likely that a different combination of genes will need to be manipulated to allow normal development for each species, with a high cost to pay if the 'wrong' genes are manipulated," according to Munsie.

"We need to pause and evaluate under what circumstances, if any, the technology should be applied and, if so, to whom. Simple headlines about being able to create young from same sex parents fail to fully capture the complexity and challenges ahead."

Image caption: This image shows a healthy adult bimaternal mouse (born to two mothers) with offspring of her own. Image credit: Leyun Wang.