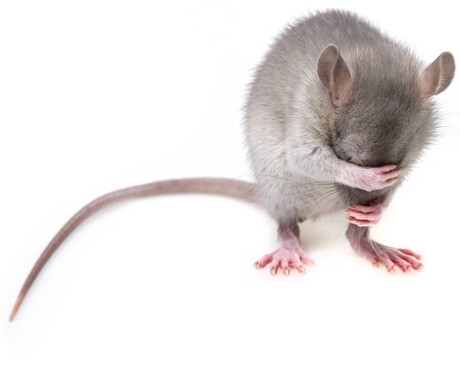 Stress seems to have a negative effect on the learning of movements in mice, according to a recent study at the University of Bonn. The study found that the neurons of rodents lose some of their contacts with other neurons after stress; the animals also developed motor deficits.

The results of the study, published in the journal Translational Psychiatry, may be useful for earlier diagnosis and improved therapy of stress-related diseases such as depression. They also document that stress leaves traces in the brain — possibly permanent ones.

Chronically stressed people often show abnormalities in their motor skills, such as poorer fine motor control. However, how these symptoms occur has hardly been studied so far. Prof Dr Valentin Stein and his team set out to answer this question in their study.

The researchers used mice as experimental animals, some of which they exposed to a stressful situation for a few days. The team used a special microscopy method to take pictures of the rodents’ brains, focusing on parts of the cerebral cortex responsible for motor control and learning new movements.

“With our method, it is possible to observe one and the same neuron at different points in time,” said Dr Anne-Kathrin Gellner, a physician at the University Hospital Bonn. “We can therefore see whether and how it changes as a result of stress.”

The researchers came across a conspicuous feature: after the stressful situation, the neurons studied lost some of their synapses — these are the contacts to other nerve cells. During learning processes, new synapses are usually formed or existing ones are strengthened. Instead, the stressed rodents lost up to 15% of their contacts. 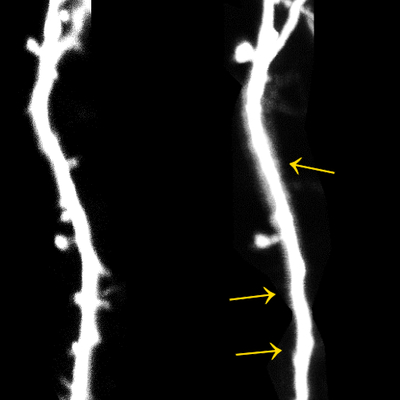 Pictured: neuron of a mouse. There are 14 days between the two images, during which the animal was stressed for 10 days. The labelled processes containing synapses were lost during this time. Image ©AG Stein/University of Bonn.

At the same time, the animals developed motor learning deficits. For example, they had to try to grasp a food pellet with one paw and transport it into their mouths. In the wild, mice use both paws to do this, so they had to relearn this skill. The non-stressed control group achieved a success rate of 30% after five days. The stressed rodents, however, only managed to take the food on every 10th attempt.

Mice vary in their sensitivity to stress. Some of them hardly develop any abnormalities after a few days of stress — they are considered resilient — yet these animals had similar difficulties to their more sensitive peers in learning to grasp with one hand. “It is therefore possible that motor tests are very suitable for detecting stress-related disorders such as depression before other symptoms become apparent,” Prof Stein said.

“Nevertheless, it may well be that psychological stress also leaves permanent traces on them if it is too long or too frequent,” Prof Stein said.

The researchers also have clues as to what triggers the loss of synapses: certain immune cells, the microglia, were activated in the rodents’ brains. They belong to the so-called phagocytes and can, for example, digest pathogens or defective cells. It is possible that they are ‘switched on’ by stress and then attack the contact sites.

The research group also examined the fluid that washes around the brain and spinal cord. They found certain proteins that can normally be detected there in neurodegenerative diseases such as Parkinson’s or Alzheimer’s.

“We therefore believe that stress-related psychiatric diseases such as depression are also associated with the degradation of neurons,” Dr Gellner said. “Accordingly, long-term stress — to which children are increasingly exposed — can potentially cause serious damage to the brain.”