Sunflowers: source of stability in proteins 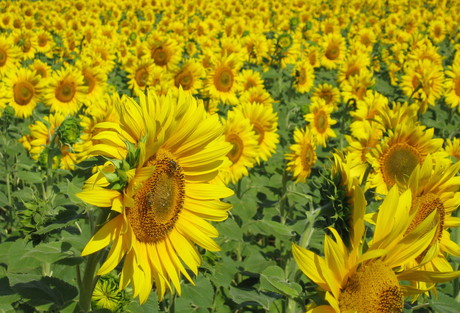 An enzyme in the common sunflower plant has unexpectedly been found to cleave proteins as well as bind them together.

Creating stabile bioactive peptides is highly valued by the pharmaceutical industry and turns out to be a task the common sunflower forges in its seeds.

Researchers from the ARC Centre for Excellence in Plant Energy Biology made the surprising finding that the protease, asparaginyl endopeptidase (AEP), has the ability to cut proteins as well as bind them together in sunflower seeds.

Proteases usually cleave proteins in a one-way reaction, but under some conditions they can ligate or bind them together.

When investigating the pathway sunflowers use to make sunflower trypsin inhibitor 1 (SFTI-1), the researchers found that AEP is essential for the creation of this super-stable ring protein. AEP transforms SFTI-1 from its linear parent precursor molecule into a small stable ring protein using cleavage and ligation at the same time.

“The reaction isn’t really ligation as the energy for that comes from cutting at the same time. It’s a mouthful, but we’re calling it a cleavage-dependent intramolecular transpeptidation reaction, which basically means a cutting and a ligation reaction happening at the same time makes the critical bond,” said team leader Professor Joshua Mylne from the University of Western Australia.

“Now we’re desperate to know exactly what changes in AEP allowed it to do this reaction because looking at its sequence, you’d just expect this ligating AEP to be like any other protein-cutter.”

Using artificial proteins that mimic the parent precursor molecule of SFTI-1, the researchers developed an in situ assay and confirmed that some AEP enzymes conducted ligation by converting the linear parent molecule into a small, stable protein ring.

They also produced several recombinant plant AEPs in Escherichia coli and confirmed that AEP could directly perform the excision/ligation. One recombinant AEP from jack beans catalysed a typical cleavage reaction and a cleavage-dependent, intramolecular transpeptidation to create SFTI-1.

The research also included the discovery of a degrading pathway in which any misprocessing was cleaned up making the process 100% efficient in sunflower seeds.

“You can find AEP enzymes in all plants where they defend plants from pathogens and mature seed store proteins, but in sunflowers AEP appears to have specialised to produce a small cyclic peptide that we think protects the seeds from insects,” said Dr Kalia Bernath-Levin from UWA.

The researchers propose that the evolution of such ligating endoproteases enables plants like sunflowers and jack beans to stabilise bioactive peptides.

As well as providing insights into protein biosynthesis and how protein machinery can stabilise proteins, the work also provides a starting point for making custom enzymes that can join proteins together. This ability to make super-stabile proteins may prove valuable in the production of therapeutic drugs.

The study has been published in the journal Chemistry & Biology.