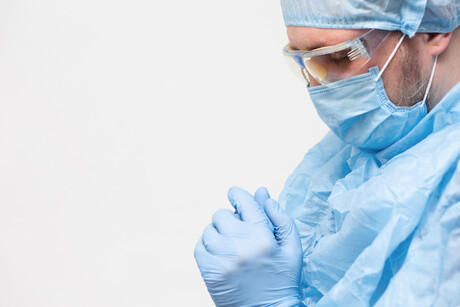 The University of Queensland (UQ) and CSL have announced that their COVID-19 vaccine candidate, v451, will not proceed to Phase 2/3 clinical trials following reports of false positive HIV results in study volunteers.

UQ commenced a Phase 1 trial of vaccine candidate v451 in July 2020, to assess safety and immunogenicity in healthy volunteers. The trial had shown that the vaccine elicits a robust response towards the SARS-Cov-2 virus and had a strong safety profile, with no serious adverse events or safety concerns reported in the 216 trial participants.

The issue lay in the fact that, as part of the vaccine’s design, researchers included a small fragment of a protein taken from the HIV virus, known as glycoprotein 41 (gp41). This was used to create a so-called ‘molecular clamp’ to hold the vaccine’s synthetic virus in place.

Although the researchers have confirmed the protein fragment poses no health risk to people who have taken the vaccine, they have identified a partial antibody response to it among trial participants. This means participants are developing antibodies against what appears to be HIV, without actually being infected with the virus — and this has the potential to interfere with some HIV screening tests that look for these antibodies.

Trial participants were fully informed of the possibility of a partial immune response to this component, but it was unexpected that the levels induced would interfere with well-established HIV testing procedures. CSL and the Australian Government have therefore agreed that, while the Phase 1 trial may continue in order to assess how long the antibodies persist, the vaccine will not proceed to Phase 2/3 trials.

UQ vaccine co-lead Professor Paul Young said that although it was possible to re-engineer the vaccine, the team did not have the luxury of time needed. “Doing so would set back development by another 12 or so months, and while this is a tough decision to take, the urgent need for a vaccine has to be everyone’s priority,” he said.

“I said at the start of vaccine development that there were no guarantees, but what is really encouraging is that the core technology approach we used has passed the major clinical test. It is a safe and well-tolerated vaccine, producing the strong virus-neutralising effect that we were hoping to see. So we will continue to push forward and we are confident that with further work the molecular clamp technology will be a robust platform for future vaccine development here in Australia and to meet future biosecurity needs.”

CSL was working towards taking responsibility for the Phase 2/3 clinical trial and large-scale manufacture of v451 through its influenza vaccines company, Seqirus, with the Australian Government having agreed to purchase 51 million doses of the vaccine so long as it met all necessary regulatory requirements. With that plan no longer viable, the government has since secured an additional 20 million doses of the University of Oxford/AstraZeneca vaccine AZD1222, which protects against symptomatic disease in 70% of cases on average according to peer-reviewed interim Phase 3 trial results published this week. CSL had already agreed with AstraZeneca to manufacture approximately 30 million doses of AZD1222 through Seqirus, with first doses planned for release to Australia early next year.

“CSL and Seqirus are committed to continuing our work to protect the Australian population against COVID-19,” said Dr Andrew Nash, Chief Scientific Officer for CSL. “Manufacture of approximately 30 million doses of the Oxford/AstraZeneca vaccine candidate is underway, with first doses planned for release to Australia early next year. In addition, CSL has agreed at the request of the Australian Government to manufacture an additional 20 million doses.”

In addition, the government has committed to 11 million more vaccine doses from biotech company Novavax, in addition to the 40 million already purchased. A further purchasing agreement remains in place for 10 million doses of the Pfizer/BioNTech vaccine — which was today endorsed by an expert panel of advisers to the US FDA — and the government’s membership of the international COVAX Facility allows the purchase of over 25 million doses of a range of other potential vaccines.