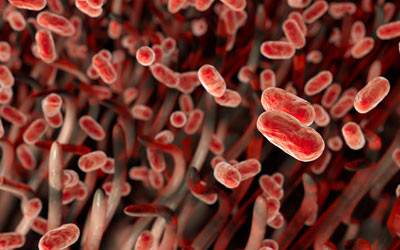 Australian researchers have discovered that a dose of the whooping cough vaccine might reduce cases of childhood food allergies — but their celebrations may be short-lived, as whooping cough bacteria appear to be evolving to better adapt and survive.

A retrospective study led by the Wesfarmers Centre of Vaccines & Infectious Diseases, based at the Telethon Kids Institute, recently found that using two different types of the whooping cough vaccine could have the added benefit of boosting protection against life-threatening allergies to foods like eggs, milk, soy, peanuts, tree nuts, wheat, fish and shellfish. Their work, published in The Journal of Allergy and Clinical Immunology: In Practice, thus advocates for a return to a whooping cough vaccine that has actually been phased out in Australia.

Serving as corresponding author on the study was Professor Tom Snelling, a paediatrician and vaccine researcher at the Wesfarmers Centre. He explained that in Australia doctors these days administer an ‘acellular’ whooping cough vaccine that targets three antigens in the bacteria of the highly contagious respiratory disease, which can be fatal to infants. All babies need to receive a dose from six weeks old, and then again at four and six months.

“Many countries around the world use an older ‘whole-cell’ whooping cough vaccine; however, this was replaced by the updated acellular vaccine across Australia in the late 1990s,” Prof Snelling said. “Since use of the whole-cell vaccine was phased out, researchers noticed an increase in both the number of cases of food allergies and their severity.”

Researchers reviewed the cases of 500 children diagnosed with food allergy by specialist allergists over the past 20 years, discovering that children who had received one or more doses of whole-cell vaccine in the late 1990s were 23% less likely to be diagnosed with a food allergy than those who didn’t.

“There are currently 250,000 young Australians living with severe food allergy, and up to three in every 10 babies born each year will develop either a food-related allergy or eczema,” Prof Snelling said.

“These allergies occur when the immune system reacts to everyday substances such as different types of food. We believe that by harmlessly mimicking infections, some vaccines such as the whole-cell whooping cough vaccine have the potential to help steer the immune system away from developing allergic reactions.”

Professor Katie Flanagan from Launceston General Hospital and the University of Tasmania, who was not part of the study, said such non-targeted effects of vaccines have been well described in the literature in recent years. She explained that they occur “because vaccines can modify the immune profile and thereby alter susceptibility to allergy and infections that are not targeted by the vaccine”.

The research team has since been awarded a $3.9 million grant from the National Health and Medical Research Council (NHMRC) to further investigate these findings and is conducting a carefully controlled study involving 3000 Australian babies throughout 2020.

“Participants will be followed until they are 12 months old to confirm whether the whole-cell vaccine truly helps to protect against food allergies in infancy and, if successful, a new vaccine schedule could form part of an effective strategy to combat the rise in food allergies.”

There’s just one problem with the plan to bring back the whole-cell vaccine — whooping cough bacteria appear to be becoming smarter, and that could mean the need for an entirely new vaccine.

Australia’s whooping cough epidemic from 2008 to 2012 saw more than 140,000 cases — with a peak of almost 40,000 in 2011 — and revealed the rise of evolving strains able to evade vaccine-generated immunity. In a series of studies led by UNSW, the latest published in the journal Vaccine, researchers took this knowledge further and showed that the evolving strains made additional changes to better survive in their host, regardless of that person’s vaccination status. They also identified new antigens as potential vaccine targets.

Microbiologist Dr Laurence Luu, co-leader and first author on the study, said whooping cough’s ability to adapt to vaccines and survival in humans might be the answer to its surprise resurgence despite Australia’s high vaccination rates.

“We found the whooping cough strains were evolving to improve their survival, regardless of whether a person was vaccinated or not, by producing more nutrient-binding and transport proteins, and fewer immunogenic proteins which are not targeted by the vaccine,” Dr Luu said.

“This allows whooping cough bacteria to more efficiently scavenge nutrients from the host during infection, as well as to evade the body’s natural immune system because the bacteria are making fewer proteins that our body recognises.

“Put simply, the bacteria that cause whooping cough are becoming better at hiding and better at feeding — they’re morphing into a superbug.”

“Another issue with the vaccine is that immunity wanes quickly — so we do need a new vaccine that can better protect against the evolving strains, stop the transmission of the disease and provide longer lasting immunity.”

Study co-leader Professor Ruiting Lan said while he would like to see a new vaccine developed and introduced in the next 5–10 years, the research team’s discovery did not render Australia’s whooping cough vaccine redundant; indeed, he said it is critical that people are vaccinated to prevent the spread of whooping cough.

“We [also] need more research to better understand the biology of the whooping cough bacteria, how they cause disease and what proteins are essential for the bacteria to cause infection, so that we can target these proteins in a new and improved vaccine,” he said.

“This will all help to futureproof new vaccines against the evolving whooping cough strains.”

Dr Luu agreed that it is crucial for Australia to maintain its high vaccination coverage for whooping cough, with case numbers still well below what they were before the introduction of the vaccine.

“Vaccination is especially important for children, people who are in contact with children and pregnant women who need the vaccine to produce antibodies to protect their newborns from developing whooping cough in the first few weeks of life,” he said.