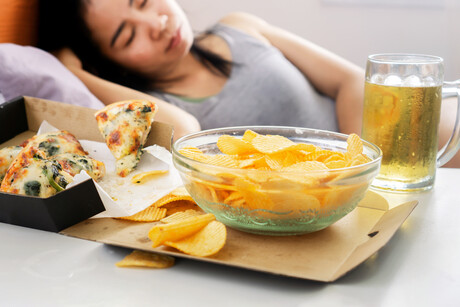 University of South Australia (UniSA) neuroscientists have established a clear link between mice fed a high-fat diet for 30 weeks, resulting in diabetes, and a subsequent deterioration in their cognitive abilities, including developing anxiety, depression and worsening Alzheimer’s disease. Mice with impaired cognitive function were also more likely to gain excessive weight due to poor metabolism caused by brain changes.

In the study, published in the journal Metabolic Brain Disease, mice were randomly allocated to a standard diet or a high-fat diet for 30 weeks, starting at eight weeks of age. Food intake, body weight and glucose levels were monitored at different intervals, along with glucose and insulin tolerance tests and cognitive dysfunction.

The mice on the high-fat diet gained a lot of weight, developed insulin resistance and started behaving abnormally compared to those fed a standard diet. Genetically modified Alzheimer’s disease mice showed a significant deterioration of cognition and pathological changes in the brain while fed the high-fat diet.

“Obese individuals have about a 55% increased risk of developing depression, and diabetes will double that risk,” she added.

“Our findings underline the importance of addressing the global obesity epidemic. A combination of obesity, age and diabetes is very likely to lead to a decline in cognitive abilities, Alzheimer’s disease and other mental health disorders.”

Meanwhile, a separate study of almost 21,000 people has shown that consumption of seven or more units of alcohol per week is associated with higher iron levels in the brain. Iron accumulation in the brain has been linked with Alzheimer’s and Parkinson’s diseases and is a potential mechanism for alcohol-related cognitive decline.

With evidence growing that even moderate alcohol consumption can adversely impact brain health, Anya Topiwala from the University of Oxford and colleagues explored relationships between alcohol consumption and brain iron levels. Their 20,965 participants from the UK Biobank reported their own alcohol consumption, with an average intake of around 18 units per week (about 7.5 cans of beer or six large glasses of wine). All individuals completed a series of simple tests to assess cognitive and motor function, and had their brains scanned using magnetic resonance imaging (MRI). Almost 7000 also had their livers imaged using MRI to assess levels of systemic iron.

A limitation of the work is that MRI-derived measures are indirect representations of brain iron, and could conflate other brain changes observed with alcohol consumption with changes in iron levels. The researchers also acknowledge that drinking was self-reported and could be underestimated. Nevertheless, given the prevalence of moderate drinking, the researchers say there could be benefits in interventions to reduce consumption in the general population.