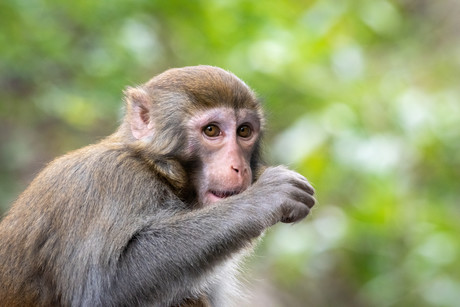 Coronavirus vaccine development has (unsurprisingly) been all the rage lately, with scientists recently enlisting macaques to help them test vaccines for SARS-Cov-2 as well as MERS.

Writing in the journal Science, Chinese researchers revealed that a newly developed SARS-CoV-2 vaccine candidate, tested in mice, rats and non-human primates (macaques), induced antibodies that neutralised several different SARS-CoV-2 strains. Critically, it did so without leading to a phenomenon known as antibody-dependent enhancement (ADE), where antibodies facilitate viral entry into host cells and which previous reports have raised as a concern. Based on the study authors’ observations, they propose that their vaccine candidate is safe in macaques and should be explored in clinical trials in humans.

Purified inactivated viruses — safe and effective for the prevention of diseases caused by viruses like influenza virus and poliovirus — have been traditionally used for vaccine development. Here, to develop preclinical models for such a SARS-CoV-2 vaccine, lead researcher Qiang Gao and colleagues isolated an array of virus strains from 11 hospitalised patients from China, Italy, Switzerland, the UK and Spain. One strain was selected and developed into a purified, inactivated vaccine candidate, named PiCoVacc.

When tested in mice, PiCoVacc could elicit about tenfold more antibodies against the virus spike protein than were found in serum from the recovered COVID-19 patients, the authors reported. In mice and rats vaccinated with PiCoVacc and infected with the 10 remaining virus strains three weeks later, PiCoVacc neutralised all strains.

The researchers next vaccinated macaques at doses of either 1.5 or 6 µg three times over the course of two weeks. When later infected with SARS-CoV-2 strains, the animals who received the 6 µg dose showed complete protection, and without observable ADE.

The authors noted that the possibility that ADE could manifest after antibody titres wane could not be ruled out. Nevertheless, they said the results “suggest a path forward for clinical development of SARS-CoV-2 vaccines for use in humans”. Clinical trials with PiCoVacc are thus expected to begin later this year.

Meanwhile, US and UK researchers have announced in Science Advances that a single-dose vaccine has been shown to protect rhesus macaques from another coronavirus — Middle East respiratory syndrome coronavirus (MERS-CoV) — which passes from dromedary camels to humans and kills more than one-third of those infected. Serum extracted from the primates’ blood also neutralised six MERS-CoV strains from Africa and the Middle East, and the vaccine was shown to protect transgenic mice from all six strains.

MERS-CoV is one of three coronaviruses to have emerged with the capacity to infect humans within the last 18 years, first appearing in 2012 and spreading to the Arabian Peninsula, Africa and other parts of the Middle East. As with SARS-COV-2, the clinical manifestations of MERS-CoV infection range widely, from no observable effects to severe respiratory illness and death. Currently, no vaccine is available to protect against the MERS-CoV virus, and vaccine testing in non-human primates has been limited.

To test whether a proposed vaccine — a replication-deficient simian adenovirus vaccine vector that encodes full-length MERS-CoV spike protein (ChAdOx1 MERS) — can effectively protect rhesus macaques, Neeltje van Doremalen and colleagues vaccinated three groups of six primates with either a single dose or a multivaccine ‘prime-boost’ regimen. The macaques were then infected with MERS-CoV through the trachea, nasal passages, mouth and eyes.

Based on these results, future clinical studies are being planned for the ChAdOx1 MERS vaccine. The researchers have also concluded that their platform may be used to develop vaccines against other novel coronaviruses — perhaps even including SARS-CoV-2.