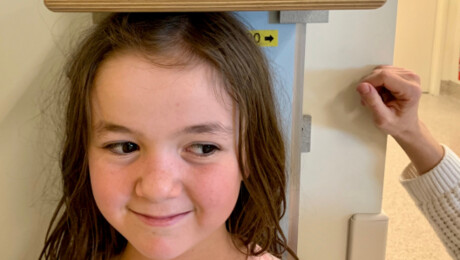 A phase 3 clinical trial has shown that a new drug boosts bone growth in children born with achondroplasia — the most common type of dwarfism. The international trial was led by the Murdoch Children’s Research Institute (MCRI) and has been published in the journal The Lancet.

Achondroplasia is a genetic bone disorder affecting 250,000 people worldwide, or about one in every 25,000 children. It is caused by a mutation in the FGFR3 gene that impairs bone growth and means that children grow around 4 cm per year, instead of the usual 6 to 7 cm.

Current achondroplasia treatments, like surgery, only address the symptoms. By contrast, the experimental drug vosoritide is a precision therapy directly targeted at the molecular cause of the disease, blocking the activity of FGFR3 and potentially returning growth rates to normal.

“This drug is like releasing the handbrake on a car; it lets you get up to full speed instead of having to drive with the brakes on,” said MCRI clinical geneticist Professor Ravi Savarirayan, who led the study.

Previous MCRI-led trials have confirmed vosoritide is safe to give to young people with dwarfism, with the phase 2 trial showing that participants grew 50% faster compared to baseline with no adverse effects on body proportion. The phase 3 trial conclusively shows the drug is effective at increasing bone growth over one year of daily injections.

Over 100 children aged five to under 18 were enrolled in the randomised, double-blind, placebo-controlled trial, which was conducted at 24 hospitals in seven countries. The children who received daily injections of vosoritide grew an average of 1.57 cm per year more than the children who received a placebo, which brought them almost in line with their typically developing peers.

Although the trial did not significantly improve the children’s proportions between their upper and lower bodies, the children will be followed until they achieve their final adult height to see how long the drug’s effects last and whether they experience a growth spurt during puberty, as this doesn’t normally happen in children with achondroplasia. Vosoritide is also being tested in children from birth to five years, which may improve final height, body proportion and other age-related complications such as spinal cord compression, which can cause sudden death.

“We know that beyond the cold hard facts and figures around growth rates and bone biology, we have hope that a treatment can improve kids’ health outcomes [and] social functioning and increase access to their environments,” Prof Savarirayan said. “Anecdotally, our patients tell us they now are able to do more stuff like climbing trees, jumping rocks and being more independent generally, which is specific to their experiences.”

BioMarin Pharmaceutical, which manufacturers the peptide drug and funded the trial, has applied to the US Food and Drug Administration to license vosoritide for its use in treating achondroplasia. The European Medicines Agency has already validated the company’s application; Australian licensing is expected to follow sometime after a successful US application.

A research team has mapped the unique genetic profile of the skeleton's 'master...