Fungi in the gut influence health and disease 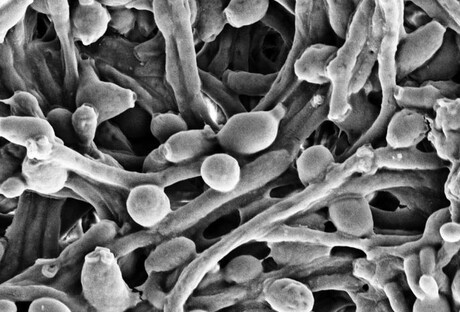 Bacteria’s role in gut health has received a lot of attention in recent years, but new research published in the journal Nature shows that fungi — another microorganism that lives within us — may be equally important in health and disease.

Fungi thrive in the healthy gut, but the researchers found they can also cause intestinal damage that may contribute to inflammatory bowel disease (IBD). Experiments with mice show that normally, the immune system keeps fungi in check, targeting the microbe when it switches into a state that can cause harm. When the system is off-balance, disease is more likely to occur.

“Fungi have been wholly understudied in part because they are vastly outnumbered by bacteria,” said senior author June Round, professor of pathology at University of Utah Health. She became interested in this line of research after noting that a common medical test for diagnosing Crohn’s disease, a type of IBD, works by detecting antibodies against fungi — and yet, how antibodies affect fungi’s influence on disease had yet to be explored.

To dig deeper, her team searched for the trigger of the immune response. Working with patient samples and carrying out tests with mice, they determined that the yeast Candida albicans — one of the main species of fungi that reside in the human gut — elicited the strongest immune response. Further investigation showed that antibodies zeroed in on elongated fungal cell types called hyphae, specifically binding to proteins called adhesins that help microbes stick to surfaces and become invasive.

Probing the fungi’s role in gut health, the researchers found that mice populated with the yeast in its normal, rounded state remained healthy. In contrast, mice populated with Candida in its invasive form caused intestinal damage that resembled IBD. The results show that normal antibody responses in the gut inhibit disease by recognising the harmful, hyphal form of fungi.

IBD isn’t the only health condition associated with fungi. Another is vaginal yeast infections. The researchers determined that a vaccine being investigated as a remedy for yeast infection triggered an immune reaction against adhesin proteins that is similar to the reaction in Crohn’s patients. When inoculated with the vaccine, mice normally prone to an IBD-like condition were less likely to develop disease.

The study shows proof of concept that, one day, vaccines could be used to curb gastrointestinal disease by enhancing natural immune responses that encourage a healthy balance of fungi and other gut microbiota. The researchers are now investigating whether vaccines could help mitigate IBD in people — and whether the same approach can be applied more broadly to shape other microbial communities in the gut.

“We aim to exploit interactions with commensal microbes and the host immune system to harness microbial products for therapies,” Prof Round said.

In addition to implications for disease, the findings also suggest fungi may be important in the healthy gut. Typically, the immune system’s job is to clear infections by getting rid of invasive organisms. In this case, fungi benefit from their interaction with antibodies. The immune reaction prods fungi from their invasive state into their rounded, budding state, which improves their survival in the gut.

“The immune system is constraining Candida to its least pathogenic form,” said Dr Kyla Ost, a postdoctoral researcher in Prof Round’s lab and the study’s lead author. “This is showing us that the communication between host and microbe can be friendly, as opposed to antagonistic, in order to benefit both.”