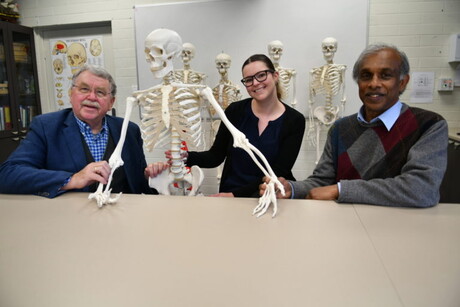 South Australian researchers have revealed a significant increase in the prevalence of the median artery in humans since the late 19th century, suggesting that our species is still evolving — and changes in natural selection could be the major reason. Their research has been published in the Journal of Anatomy.

The median artery is the main vessel that supplies blood to the human forearm and hand when first formed in the mother’s womb, but it disappears once two arteries seen in adults develop. The radial and ulnar arteries usually replace the median artery during developmental stages in the womb — so most adults obviously don’t have a median artery — but increasing numbers of cases retain it, so a person can have all three arteries. This evolutionary trend will continue in those born 80 years from today, with the median artery becoming common in the human forearm.

Sketch of the median artery vessel, which supplies blood to the human forearm and hand. Image credit: Professor Maciej Henneberg.

Flinders University researcher Dr Teghan Lucas said the new study shows that modern humans are evolving at a faster rate than at any point in the past 250 years, stating, “Since the 18th century, anatomists have been studying the prevalence of this artery in adults and our study shows it’s clearly increasing. The prevalence was around 10% in people born in the mid-1880s compared to 30% in those born in the late 20th century, so that’s a significant increase in a fairly short period of time when it comes to evolution.

“This increase could have resulted from mutations of genes involved in median artery development or health problems in mothers during pregnancy, or both actually. If this trend continues, a majority of people will have median artery of the forearm by 2100.”

Senior author Professor Maciej Henneberg, from The University of Adelaide, said the median artery offers benefits because it increases overall blood supply and can be used as a replacement in surgical procedures in other parts of the human body.

“This is micro evolution in modern humans and the median artery is a perfect example of how we’re still evolving, because people born more recently have a higher prevalence of this artery when compared to humans from previous generations,” Prof Henneberg said.

“We’ve collected all the data published in anatomical literature and continued to dissect cadavers donated for studies in Adelaide, and we found about one-third of Australians have the median artery in their forearm and everyone will have it by the end of the century if this process continues.”

Other examples of human anatomy changing over time include the prevalence of spina bifida occulta (opening of the sacral canal); abnormal connections of two or more bones in feet; the increasing absence of wisdom teeth; the complete disappearance of the thyroidea ima artery; and the increasing prevalence of the fabella (a small bone in the back of the knee joint).