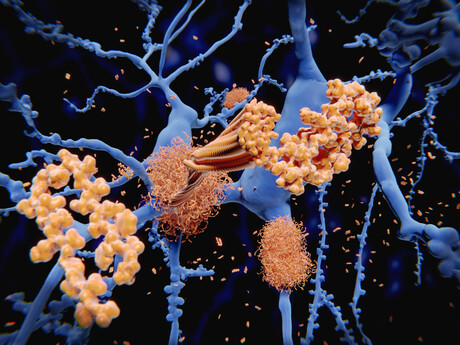 A small, light-activated molecule could represent a new approach to eliminating clumps of amyloid protein found in the brains of Alzheimer’s disease patients. Described in the journal Brain, the technique could potentially be used as an alternative approach to immunotherapy and used to treat other diseases caused by similar amyloids.

Led by The University of Tokyo, researchers injected the molecule directly into the brains of live mice with Alzheimer’s disease and then used a specialised probe to shine light into their brains for 30 minutes each day for one week. Chemical analysis of the mouse brain tissue showed that the treatment significantly reduced amyloid protein. Results from additional experiments using human brain samples donated by Alzheimer’s disease patients supported the possibility of future use in humans.

The small molecule is known as a photo-oxygenation catalyst. It appears to treat Alzheimer’s disease via a two-step process.

First, the catalyst destabilises the amyloid plaques. Oxygenation, or adding oxygen atoms, can make a molecule unstable by changing the chemical bonds holding it together. Laundry detergents or other cleaners known as ‘oxygen bleach’ use a similar chemical principle.

The catalyst is designed to target the folded structure of amyloid and likely works by cross-linking specific portions called histidine residues. The catalyst is inert until it is activated with near-infrared light, so in the future, researchers imagine that the catalyst could be delivered throughout the body by injection into the bloodstream and targeted to specific areas using light.

Second, the destabilised amyloid is removed by microglia — immune cells of the brain that clear away damaged cells and debris outside healthy cells. Using mouse cells growing in a dish, researchers observed microglia engulfing oxygenated amyloid and then breaking it down in acidic compartments inside the cells.

“The importance of our study is developing this technique to target the amyloid protein to enhance clearance of it by the immune system,” said Yukiko Hori, co-first author of the research.

While some existing Alzheimer’s disease treatments can slow the formation of new amyloid plaques, eliminating existing plaques is especially important in Alzheimer’s disease because amyloid begins aggregating years before symptoms appear. Furthermore, the photo-oxygenation catalyst should be capable of removing amyloid protein regardless of when or where it formed in the body.

“Our catalyst binds to the amyloid-specific structure, not to a unique genetic or amino acid sequence, so this same catalyst can be applied to other amyloid depositions,” said Professor Taisuke Tomita, who led the project at The University of Tokyo. This is significant given that around 4000 people in the USA every year are diagnosed with diseases caused by amyloid outside of the brain, collectively known as amyloidosis.

The research team is now working to modify the design of the catalyst so it can be activated by shining light through the skull.

Image caption: Amyloid protein (orange) forms clumps among neurons (blue). Amyloid in the brain is one of the proteins associated with Alzheimer’s disease, but amyloid clumps in other parts of the body can cause other illnesses. Image credit: ©stock.adobe.com/au/Juan Gärtner