Malaria on the decline

Malaria is killing fewer people with the number people dying from the mosquito-borne parasitic infection falling dramatically since 2000, according to the World Malaria Report 2014. 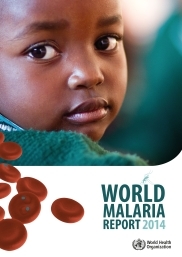 Malaria cases are also on a steady decline. Between 2000 and 2013, the malaria mortality rate decreased by 47% worldwide and by 54% in sub-Saharan Africa - where about 90% of malaria deaths occur.

New analysis across sub-Saharan Africa reveals that despite a 43% population increase, fewer people are infected or carry asymptomatic malaria infections: the number of people infected fell from 173 million in 2000 to 128 million in 2013.

Between 2000 and 2013, access to insecticide-treated bed nets increased substantially.

In 2013, almost half of all people at risk of malaria in sub-Saharan Africa had access to an insecticide-treated net, a marked increase from 3% in 2004. And this trend is set to continue, with a record 214 million bed nets scheduled for delivery to endemic countries in Africa by year-end.

“We can win the fight against malaria,” says Dr Margaret Chan, Director-General, WHO. “We have the right tools and our defences are working. But we still need to get those tools to a lot more people if we are to make these gains sustainable.”