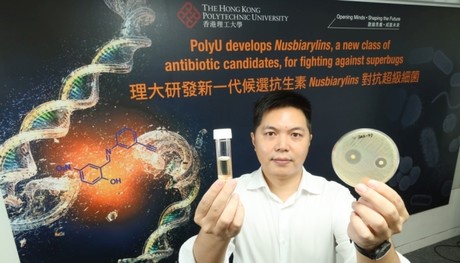 Hong Kong scientists have developed a class of antibiotic drug candidates suitable for fighting against multidrug-resistant superbugs, including methicillin-resistant Staphylococcus aureus (MRSA). The novel small molecules, based on a new target, new chemical structure and new antimicrobial mechanism, are said to be different to existing antibiotics, demonstrating more effective inhibition of bacterial growth — with no toxicity to human cells.

Drug resistance has been declared as one of the biggest threats to global health by the World Health Organization, with MRSA becoming one of the most serious concerns. And with the search for new antibiotics having shown little progress since the mid-1980s, the development of a new class of antimicrobial agents, by researchers from The Hong Kong Polytechnic University (PolyU) and The Chinese University of Hong Kong, should mark a breakthrough in the battle against multidrug-resistant bacterial infections.

Most antibiotics currently on the market fight bacteria through disrupting its DNA synthesis or protein functions. The innovative antimicrobial mechanism developed by PolyU team focuses on inhibiting the interaction between two proteins, NusB and NusE, which is crucial for synthesis of bacterial ribosomal RNA (rRNA). By designing small molecules to disrupt NusB-NusE interaction, bacterial cell proliferation can thus be curbed.

The team developed a model basing on the structure of NusB and NusE, and applied computer-aided screening to screen about 5000 small molecule compounds with drug-like properties to explore for inhibitors for NusB-NusE interaction. The shortlisted compounds were then put to tests for antimicrobial activity against different MRSA strains. A compound, (E)-2-{[(3-ethynylphenyl)imino]methyl}-4-nitrophenol (hereafter addressed as MC4), was identified as having more effective antibacterial abilities than the commonly used antibiotics. The minimum inhibitory concentration — the lowest concentration of a chemical/drug for preventing bacterial growth — of MC4 for some MRSA strains was as low as 8 μg/mL, compared to MICs of >64 μg/mL demonstrated by two antibiotics currently on the market: oxacillin and gentamicin.

Tests of MC4 on human lung and skin cells, which are most typically affected by MRSA infections, meanwhile indicated no significant toxicity. The fact that NusB and NusE exist only in bacteria and not human cells has also addressed toxicity concerns.

The research team has further structurally modified MC4 for optimisation, with 167 analogues synthesised so far. The compounds have been named ‘Nusbiarylins’ (basing on the target protein NusB and their biaryl structure). Laboratory tests of Nusbiarylins against a panel of MRSA strains proved their consistent antibacterial activity, some with an MIC as low as 0.125 μg/mL — much better than commonly used antibiotics such as vancomycin, which has an MIC of 1 μg/mL and is labelled as the ‘last resort’ antibiotic in the United States.

Further preclinical studies on the in vitro pharmacological properties of Nusbiarylins on human cells indicated that the compounds lead to nearly no haemolysis (ie, human blood cell breaking) — an indication of being safe for injection — and have excellent results in intestine absorption, implying suitability for oral administration.

The findings have been published in leading scientific journals, including Biochemistry, ACS Infectious Diseases, the European Journal of Medicinal Chemistry and Bio-organic Chemistry.

“Our research is now in the stage of animal studies, conducting infectious model studies and pharmacokinetic studies,” said PolyU’s Dr Ma Cong, who led the research team. “These are the critical steps preceding clinical trials on humans for drug development. At this moment, there are very few antibiotic-related studies being able to complete such stage worldwide. Our findings so far are very promising. We believe further studies on these compounds will contribute to a new era of antibiotic discovery, contributing towards the fight against superbugs.”