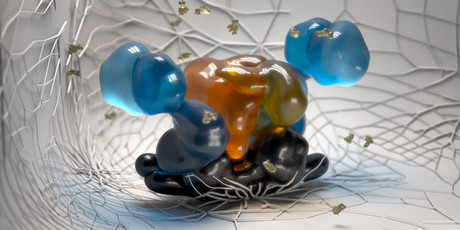 An international team of scientists, led by the University of Leeds and the University of Pennsylvania, has discovered a new internal regulator that helps control the body’s response to fight infection — a regulator which could serve as a target for new drugs to tackle autoimmune diseases, where healthy tissues are attacked by the body’s own immune system. Their work has been published in the journal Nature.

The scientists used powerful cryo-electron microscopes at the University of Leeds’ Astbury Centre to reveal the structure of the regulator, which comprises two proteins in the body called BRISC and SHMT2, to understand for the first time how they work together in a cell. The protein complex acts to increase the immune response of cells, which occurs when they detect an invading pathogen.

“The microscopes have allowed us to understand the structure of this protein complex in superb detail and, by building an accurate 3D model, we discovered that it plays a completely unexpected role in regulating our immune response,” said Dr Elton Zeqiraj from the University of Leeds. Once the structure had been revealed, it was possible to design genetically engineered versions of the proteins and map out the functions of this complex in cells.

The scientists also discovered, rather unexpectedly, that the BRISC-SHMT2 protein complex can be regulated by the active form of vitamin B6. The SHMT2 protein is one of a small but growing number of molecules that are involved in both cell metabolism and immune responses, so the team were very surprised by their findings — though they caution that further research is needed to fully understand the role that it plays.

“We now have an unprecedented understanding of how this protein complex functions at atomic resolution,” said co-lead author Dr Roger Greenberg, from the University of Pennsylvania. “It reveals the molecular basis underlying communication between metabolism and immune responses, while also pointing to new ways to prevent the action of this complex in diseases stemming from overactive inflammatory signals.”

Co-author Dr Francesco Del Galdo, from the University of Leeds, said, “Targeted therapies have revolutionised the way we manipulate the immune system and this discovery is giving us crucial insights on the role of metabolism in regulating innate immunity.”

Dr Zeqiraj added, “The next step is to find a way of targeting this protein to inhibit the process, to prevent our immune system from attacking healthy cells.

“We’re a long way off being able to find a new effective treatment for autoimmune disease, but we’re excited because this discovery could open the door to a new class of drugs.”

The research was primarily funded by the Wellcome Trust, the Royal Society, the US National Cancer Institute, the Lupus Research Alliance and Scleroderma and Raynaud’s UK.

Image caption: A visualisation of the BRISC-SHMT2 protein, created by Jeroen Claus from Phospho Biomedical Animation.