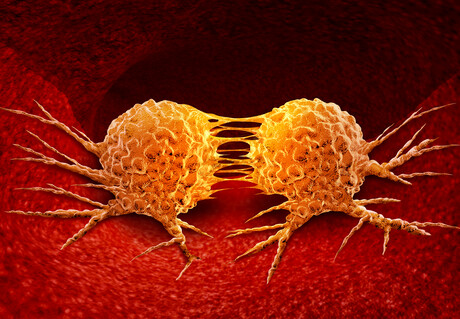 Researchers at the Children’s Medical Research Institute (CMRI) in Sydney have made an unexpected discovery about the protein actin — one that will spark efforts to produce new tailored therapies to kill cancer cells.

Actin is well known as the protein that interacts with another protein called myosin to make muscles contract. Actin also forms cables inside cells that connect up and function like girders in a building, contributing to the structure and shape of cells.

While scientists have known for decades that actin plays this critical role in the main body of the cell, its role in the cell’s control centre — the nucleus — has been controversial. This is because in order for cancers to grow, cancer cells need to make many new copies of themselves — and every time this happens, the DNA in the cancer cells’ nuclei must be replicated.

“Whether actin played a role in DNA replication was not known,” said Dr Noa Lamm, lead scientist on the project, whose previous work as a PhD student suggested actin may have an unexpected nuclear function. Her new research, published in the journal Nature Cell Biology, shows that this hunch was correct.

DNA replication in a cancer cell is like an old car travelling at its top speed — it frequently breaks down and has to be restarted. Cancer chemotherapy exploits this weakness in cancer cells by making the process break down even more frequently in an attempt to destroy them.

Dr Lamm found that when cancer cells encounter problems replicating their DNA, actin cables form inside the nucleus. This allows the nucleus to change shape and increases the ability of the cancer cell to repair its DNA and restart the replication process.

Using super-resolution microscopy, the researchers showed that damaged DNA slides along the actin network to move to areas in the nucleus where repair occurs most efficiently. Scientists were previously unaware that cancer cells protected themselves in this way. Critically, this research found that actin performed these unexpected functions in response to treatment with chemotherapy and helped cancer cells resist the treatment.

Dr Lamm believes there are two ways this discovery will help cancer patients. First, treatments that disable the actin cable mechanism could kill cancers that already have difficulty maintaining a high rate of DNA replication. Second, adding a treatment that interferes with the actin cables to commonly used chemotherapies will enhance their success rate.

Dr Lamm was inspired to become a cancer researcher after losing her mother to the disease when she was young. Now she feels excited to have found a new approach for treating cancer.

“We are very hopeful this will be a big step forward, because all progress starts with basic discovery,” she said.