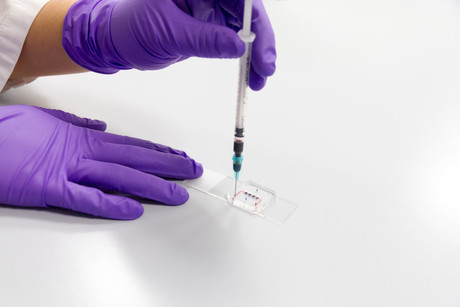 German researchers have developed a so-called ‘retina-on-a-chip’ that combines living human cells with an artificial tissue-like system, providing a useful alternative to existing models for studying eye disease and allowing scientists to more efficiently test the effects of drugs on the retina — the thin layer of tissue at the back of the eye that senses light and sends messages to the brain via the optic nerve to enable us to see. Their work has been described in the journal eLife.

Currently, scientists often rely on animals or retina organoids -— tiny retina-like structures grown from human stem cells — to study eye diseases and drug side effects. But results from studies in both models often fail to describe disease and drug effects in people accurately. As a result, a team of scientists has tried to recreate a retina for testing purposes using engineering techniques.

“It is extremely challenging, if not almost impossible, to recapitulate the complex tissue architecture of the human retina solely using engineering approaches,” said Christopher Probst, Postdoctoral Researcher at the Fraunhofer Institute for Interfacial Engineering and Biotechnology and co-lead author of the study.

To overcome these challenges, the scientists coaxed human pluripotent stem cells to develop into several different types of retina cells on artificial tissue. This tissue recreates the environment that cells would experience in the body and delivers nutrients and drugs to the cells through a system that mimics human blood vessels.

“This combination of approaches enabled us to successfully create a complex multilayer structure that includes all cell types and layers present in retinal organoids, connected to a retinal pigment epithelium layer,” said co-lead author Kevin Achberger, Postdoctoral Researcher at the Eberhard Karls University of Tübingen. “It is the first demonstration of a 3D retinal model that recreates many of the structural characteristics of the human retina and behaves in a similar way.”

The team treated their retina-on-the-chip with the anti-malaria drug chloroquine and the antibiotic gentamicin, which are toxic to the retina. They found that the drugs had a toxic effect on the retinal cells in the model, suggesting that it could be a useful tool for testing for harmful drug effects.

“One advantage of this tiny model is that it could be used as part of an automated system to test hundreds of drugs for harmful effects on the retina very quickly,” Achberger said. “Also, it may enable scientists to take stem cells from a specific patient and study both the disease and potential treatments in that individual’s own cells.”

Separately to this, Australian scientists have led the development of what is claimed to be the world’s most detailed gene map of the human retina, providing new insights which will help future research to prevent and treat blindness. The retina is the first part of the eye to be mapped as part of the Human Cell Atlas — a global project to create reference maps of all human cells to better understand, diagnose and treat disease — with the results published in The EMBO Journal.

The researchers examined the complex genetic sequences behind more than 20,000 individual cells to develop a profile of all major cell types in the retina and the genes they ‘express’ to function normally. Cells mapped include photoreceptors which sense light and allow people to see, the retinal ganglion cells which transmit messages to the brain along the optic nerve and other cells which support the function and stability of the retina.

“By creating a genetic map of the human retina, we can understand the factors that enable cells to keep functioning and contribute to healthy vision,” said study co-leader Dr Raymond Wong, from the Centre for Eye Research Australia and the University of Melbourne.

“It can also help us understand the genetic signals that cause a cell to stop functioning, leading to vision loss and blindness.”

Co-leader Associate Professor Joseph Powell, from the Garvan Institute of Medical Research, added that the retinal cell atlas will benefit researchers investigating inherited retinal diseases, which occur when genetic ‘mistakes’ cause retinal cells to stop functioning. He noted, “More than 200 genes are known to be associated with retinal diseases, and having a detailed gene profile of individual retinal cell types will help us study how those genes impact on different kinds of cells.

“This understanding is the first step to better identifying what causes disease and ultimately developing treatments.”

Dr Wong said the atlas will also help scientists conducting research in the emerging area of cell therapy, which could replace faulty retinal cells with new ones developed from induced pluripotent stem cells in the lab. He said, “The retinal cell atlas will give scientists a clear benchmark to assess the quality of the cells derived from stem cells to determine whether they have the correct genetic code which will enable them to function.”

Co-leader Dr Samuel Lukowski, from The University of Queensland, concluded, “We can now build upon this atlas of healthy cells with those from other retinal diseases and across different stages of human development, which will provide the community with powerful tools for disease prediction.”