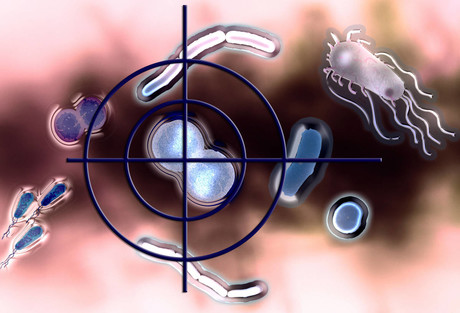 Inspired by natural products, chemists from the University of Konstanz have developed selective agents that combat infectious diseases while leaving beneficial bacteria alone.

As important as antibiotics are to treat infectious diseases, they have the disadvantage of being unable to distinguish between pathogens and the beneficial microbes that are actually vital for human health. Antibiotics can thus destroy the delicate balance of the human microbiome, resulting in permanent damage that could open us up to allergies, weight issues, chronic inflammatory bowel diseases and even psychiatric disorders. But how can we maintain ecological diversity in the case of a microbial infection, where antibiotics remain the best course of action?

Chemist Dr Thomas Böttcher and his team have now made a significant step towards solving this problem, discovering antibiotic properties in a natural product that so far had been considered merely a bacterial signal molecule.

The research team originally studied the signals of the bacterium Pseudomonas aeruginosa, which aroused their interest as it was highly selectively inhibiting the growth of Moraxella catarrhalis — a pathogen that causes, for example, otitis media in children as well as infections in patients with chronically obstructive pulmonary diseases. The team developed and investigated synthetic derivatives of the natural substance, which were found to exhibit enormous antibiotic efficiency against Moraxella catarrhalis. Their research was published in the journal Chemical Science.

What was really surprising was the substance’s selectivity: only the growth of Moraxella catarrhalis was inhibited, not that of other bacteria. Even closely related bacteria from the same species remained completely unaffected. Antibiotics with such selectivity would make precision treatment possible and specifically eliminate pathogens while preserving the diversity of beneficial microbes.

In another project, the research team collaborated with Duke University to develop novel, previously undescribed quinolone ring systems to be used against the malaria parasite. This parasite settles in the liver before invading blood cells; the researchers were able to target and eliminate the parasite at this stage of malaria. Their findings, published in the journal Chemical Communications, can now be used for targeted research and the development of selective therapies to combat malaria based on new chemical compound classes.