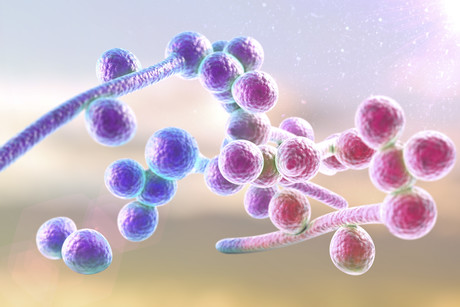 How do you stop an immune cell from killing you? If you’re the deadly fungus Candida albicans, your best bet is to steal the source of your foe’s nutrients, starving it in the process.

C. albicans is a microscopic fungus commonly found in the human body but which can turn into a dangerous infection in vulnerable hospital patients. These life-threatening infections affect an estimated 400,000 people worldwide annually and have an alarming mortality rate of 40%.

Seeking the secret behind its survival, researchers from Monash University decided to study the microbe’s response to macrophages — a type of immune cell that is ordinarily quite effective at killing disease-causing microbes such as C. albicans. The results of their research have been published in the journal Cell Metabolism.

Glucose is important for macrophages to mount effective attacks. As they respond to infection, macrophages undergo a metabolic shift, increasing consumption of glucose and becoming dependent on it. The fungus exploits this limitation by competing with the macrophage, rapidly consuming the glucose and causing the macrophage to die.

“The bug turns the immune cell’s need to consume glucose against it by depleting this key nutrient, turning the metabolic change in the immune cell into its Achilles’ heel,” said Associate Professor Ana Traven, who led the study.

“We did a lot of experiments to prove that this was the case. Now we can see what happens at the interface of immune cells and the microbe. It’s a very significant finding.”

Associate Professor Traven said that similar research papers looking at immune cell metabolism — a burgeoning field — predominantly studied the host’s response to the microbe, not what the microbe was doing. “We’ve looked at the whole picture,” she said.

Associate Professor Traven noted that the research was conducted in immune cells and an animal model, so it remains to be seen how the discovery will translate for human disease. Nevertheless, finding alternative treatment strategies is critical in the face of rising concerns over antimicrobial drug resistance, she said.

“Although we tend to underestimate their burden, estimates are that deaths from fungal infections are comparable to deaths from tuberculosis and malaria, which are well-recognised global challenges,” she said.