A giant galaxy cluster, more gravitational waves and life outside the solar system 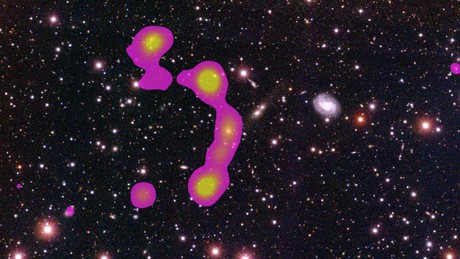 It’s been a busy couple of days for astronomers, with announcements of three significant discoveries taking place in the past 48 hours.

Yesterday, it was revealed that two participants in the Radio Galaxy Zoo citizen science project identified the huge C-shaped galaxy cluster from much smaller images of cosmic radio waves. The discovery surprised the astronomers running the program, with project co-leader Dr Julie Banfield of the ARC Centre of Excellence for All-sky Astrophysics (CAASTRO) stating, “They found something that none of us had even thought would be possible.”

The Russian astronomers, Tsimafei Matorny and Ivan Terentev, classified the newly discovered feature as a wide angle tail (WAT) radio galaxy, named for the C-shaped tail shape of highly energetic jets of plasma which are being ejected from it. It is part of a previously unreported, sparsely populated galaxy cluster and one of the biggest ever found.

“This radio galaxy might have had two distinct episodes of activity during its lifetime, with quiet times of approximately one million years in between,” said Radio Galaxy Zoo science team member Dr Anna Kapinska, also of CAASTRO.

The discovery of the Matorny-Terentev Cluster RGZ-CL J0823.2+0333 has now been published in the Monthly Notices of the Royal Astronomical Society. The two volunteers have been included as co-authors.

The news was followed today with the announcement that US scientists have detected gravitational waves for a second time, caused by the collision of two black holes 14 and eight times the size of the sun. The violent collision happened approximately 1.4 billion years ago in a distant galaxy.

The ripples reached the Laser Interferometer Gravitational-Wave Observatory (LIGO) detector in Louisiana and, 1.1 milliseconds later, the identical LIGO detector in Washington. The tiny signal was too small to be immediately seen amongst the background noise — the gravitational waves had died down so much that they stretched the LIGO detectors only a tiny fraction of the width of a proton — but 70 seconds later the supercomputer-driven data processing systems found a match between the two detectors and alerted researchers of the find.

The LIGO team glimpsed the black holes orbiting each other 27 times in their last second before coalescing. The signal was 10 times longer than that of the first gravitational wave, which was announced in February this year. Its detection has been published in the journal Physical Review Letters.

Finally, telescopes have discovered the first molecule in space that has a key attribute associated with life. The breakthrough is expected to help scientists solve one of the greatest mysteries in biology — the origin of homochirality — and offer insights into what we can expect from life throughout the universe.

Like your two hands, many molecules can exist in forms that are mirror images of each other. But molecules associated with life, such as amino acids, proteins, enzymes and sugars, are found in nature in only one form. For example, the amino acids that make up proteins only exist in the left-handed form, while the sugars found in DNA are exclusively right-handed. This phenomenon is known as homochirality.

Chiral molecules are essential to biology on Earth, but until now they hadn’t been known to exist outside our own solar system. For the first time, a ‘handed’ molecule — propylene oxide (a common compound used in making polyurethane plastics) — has been detected in space with CSIRO’s Parkes telescope and the Green Bank Telescope in the USA. 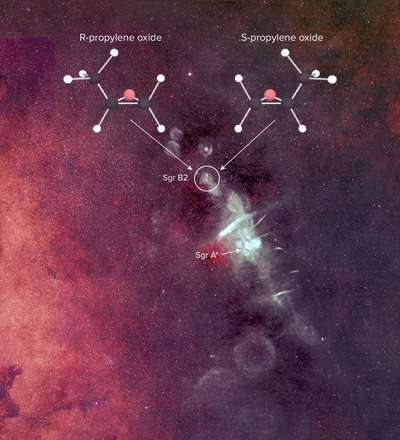 The S (Latin for sinister, left) and R (Latin for rectus, right) versions of the chiral molecule propylene oxide, which was discovered in a massive star-forming region near the centre of our galaxy. ©B Saxton, NRAO/AUI/NSF from data provided by NE Kassim, Naval Research Laboratory, Sloan Digital Sky Survey.

The chemical was found in a region near the centre of the Milky Way in an interstellar cloud, Sagittarius B2, that is actively forming stars. An Australian finding two decades ago suggested how the light from a forming star could ‘bias’ the molecules in space around it, leading to one of the handed forms being more common than the other.

“This discovery gives us a window into how an incredibly important type of molecule is made in space, and gives us the chance to understand the impact that process may have on life in the universe,” said Dr John Reynolds, director of operations at CSIRO Astronomy and Space Science.

The news was announced at a meeting of the American Astronomical Society and will appear in the journal Science.