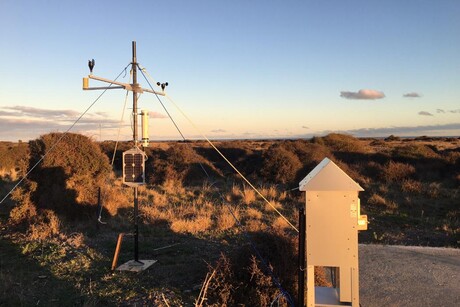 New Zealand scientists have found that microplastics, which are already in our rivers, oceans and land, are also in the air we breathe — and that airborne microplastic pollution is likely to directly affect climate change.

That’s according to a new modelling study, led by University of Canterbury (UC) atmospheric chemist Dr Laura Revell in collaboration with colleagues from UC and Victoria University of Wellington. The results have been published in the journal Nature.

Microplastics are very small plastic fragments or fibres produced from the breakdown of larger plastics. Airborne microplastics are transported by winds across the Earth and are present in the atmosphere in both urban megacities and remote less populated regions.

“Because they absorb, emit and scatter radiation, like other components of the atmosphere such as dust or greenhouse gases, they can affect the climate by cooling or warming the atmosphere,” Dr Revell said.

“We studied how microplastic fragments and fibres — two types of microplastics commonly found in the atmosphere — interact with light, and used this information in a global climate model to calculate the overall impact of airborne microplastics on Earth’s climate.

It is important to know whether airborne microplastics may become a bigger issue in future if the abundance of microplastics increases, Dr Revell said. This is likely to happen: approximately 5 billion tonnes of plastic waste have accumulated in landfills or the natural environment to date, an amount set to double over the next 30 years if current trends in plastic production and waste management continue.

“Since plastic degrades through age and exposure to light to produce microplastics, we expect microplastics to be present in Earth’s atmosphere for many years to come,” Dr Revell said.

“Indeed, if the global average concentration increases to values already seen in some megacities, then the effect of airborne microplastics on climate will be significant and potentially similar in size to other atmospheric aerosols routinely included in climate models.”

The study is said to be the first to directly link airborne microplastics and climate change, and complements others which have studied the effects of microplastics on human health and ecosystems. Its release also coincides with the news that there is almost universal agreement on the link between human activity and climate change among top climate scientists, as discovered by an international team of researchers.

A paper published in the journal Environmental Research Letters, by researchers from Monash University, Louisiana State University and George Mason University, revealed how scientific consensus on anthropogenic (human-caused) global warming has evolved over the last decade. The paper is based on the results of a survey of 2780 Earth scientists in 2019 and follows a similar study conducted in 2009.

“Although there have been many studies finding a consensus amongst climate scientists, there’s little research into exactly how agreement has evolved over time and how different definitions of climate expertise shape that view,” said Monash researcher Dr John Cook, who was part of the study.

“This is the first time the methodology of the 2009 study has been replicated to measure how climate consensus has strengthened over the last decade.”

The authors of the 2019 study found 100% of actively publishing climate experts — who had published 20 or more climate papers each between 2015 and 2019 — accept that global warming is human-caused. The figure in this group in 2009 was 97.4%. Researchers also found in the 2019 study that 98.7% of respondents who had at least 50% of their scientific publications in the area of climate change agreed with anthropogenic global warming.

“The findings show that consensus has increased across the board, and that consensus increases with the level of expertise — the more you know about climate science, the more likely you are to understand that humans are responsible for climate change,” Dr Cook said.

When analysing the responses by subdiscipline, the authors found those who self-identified as economic geologists had the lowest level of consensus — with 84.1% agreeing with anthropogenic global warming. This was a group that were the biggest doubters in the 2009 study, at 47% agreement. The researchers meanwhile found a large increase in the level of agreement on anthropogenic global warming among those self-identifying as meteorologists — from 64% in the 2009 study to 91% in the 2019 study.

Dr Cook also led a study in 2013 which found 97% of climate scientists agree with the theory of human-caused climate change. He acknowledged that there is a gap between expert consensus of anthropogenic global warming and public understanding, saying it is “imperative to strengthen efforts to engage and educate people about the scientific consensus on climate change”.

“Such efforts are essential to helping our society make more informed decisions about how to stabilise our climate,” he concluded.