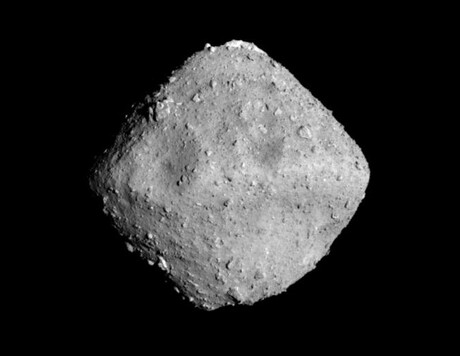 An international research team has revealed the results of their mineralogical and chemical analyses of rock samples from the asteroid Ryugu, which were transported to Earth via space capsule 18 months ago. The research results, published in the journal Science, are set to contribute new insights into the formation of the solar system and the chemical composition of terrestrial planets.

The Hayabusa2 spacecraft of the Japan Aerospace Exploration Agency (JAXA) launched in December 2014 and explored the 0.9 km-diameter asteroid for 17 months (June 2018 to November 2019), with two landing operations to collect asteroid samples. The sample capsule landed in the South Australian outback in December 2020 and was brought to Japan under strict quarantine conditions during the COVID-19 pandemic. The international team that has analysed the Ryugu samples to date consists of a total of six research groups led by scientists in Japan.

The rock samples sent to Earth by Hayabusa2 had a total weight of just over 5.4 g — most were only a few millimetres in size, with a few measuring up to one centimetre, which is close to the maximum obtainable size from the sampling site. Unlike the large number of meteorites that have impacted the Earth’s surface, the samples taken from the asteroid have a significant advantage: they are guaranteed not to have been chemically altered by entering the Earth’s atmosphere or spending time on the ground.

In their study of Ryugu, the researchers discovered that its minerals were modified in contact with an aqueous fluid at a temperature of about 37°C, but never experienced temperatures above 100°C. Chronological studies indicate that this period of aqueous alteration took place about five million years after the condensation of the first minerals in the solar system, and occurred in one of the countless solid bodies (planetesimals) from which the planets of the solar system later developed by accretion. On this planetesimal, from which Ryugu was blasted out, there might have been abundant water, which would have been an important condition for the emergence of life.

Another striking feature concerns the abundance of chemical elements contained in the rock samples: Ryugu is similar to CI (Ivuna) carbonaceous chondrites, and best resembles the composition of the solar photosphere. As noted in commentary by Professor Phil Bland from the Space Science and Technology Centre at Curtin University, “CI chondrite meteorites are very rare — there’s only half a dozen in existence… Until now, we’ve only had these small numbers of meteorites to work with. But those few rocks define a calibration point for every other geochemical analysis.”

The analyses of Ryugu samples further indicate that the asteroid stems from a planetesimal which was formed at the very edge of the solar system. Later, Ryugu migrated into the interior of the solar system and entered its present near-Earth orbit around the Sun. In current research, the hypothesis is that materials formed at the outermost edge of the solar system could have contributed in building the Earth. Carbonaceous materials could have been an important source of the so-called volatile elements on Earth. Volatile elements like hydrogen, oxygen and carbon are essential components of the Earth’s atmosphere and the oceans; therefore, they have a decisive share in the formation of life.

“These samples from this asteroid are the leftover bits of the solar system, the crumbs on the counter that you spill when making a cake,” commentated Dr Brad Tucker, from Mount Stromlo Observatory at the Australian National University. “It gives us insight into what the solar system was like billions of years ago. These samples were formed 37 million years after the first solid stuff in our solar system — a precise measurement of how long they’ve been around for. It also tells us that meteorites from similar type asteroids are a bit contaminated as they pass through the Earth’s atmosphere, shedding light on how we can use meteorites that fall to Earth to better understand the Solar System.”

Finally, it has also been revealed that 20 different amino acids — the building blocks of life on Earth — were identified in the rock samples from Ryugu. This is the first time amino acids have now been discovered that clearly did not originate or were not modified on Earth, according to research team member Prof Dr Audrey Bouvier from the University of Bayreuth.

“Against this background, too, the asteroid Ryugu is an exciting object of research that promises to provide revealing insights into the origins of life,” Bouvier said.