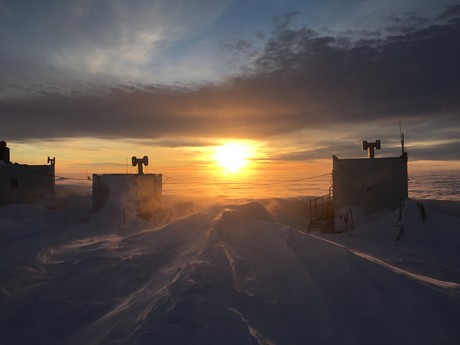 The Christmas of 2018 was very white indeed for Dr David Etheridge, an atmospheric scientist at CSIRO and co-leader of the Law Dome Hydroxyl project.

Along with several other scientists from Australia and the US, Dr Etheridge spent his summer in a temporary lab set up on a remote Antarctic ice sheet, more than 100 km from Australia’s Casey research station, where the average temperature hovered around -20°C. The aim of his mission? To investigate a natural ‘atmospheric detergent’ that cleans the air of greenhouse gases.

Although the majority of greenhouse gas emissions are carbon dioxide, there are more than 40 other gases that contribute to climate change and the depletion of the ozone layer, including methane and hydrochlorofluorocarbons. Luckily for the Earth, many of these gases are removed from the atmosphere by a naturally occurring oxidant called hydroxyl.

Composed of one atom of oxygen and one atom of hydrogen, hydroxyl (OH) is so chemically reactive that it has an average lifetime of around one second before it reacts with something and is consumed. It is this feature that enables it to remove trace gases from the atmosphere, destroying greenhouse gases like methane and industrial chemicals that deplete ozone.

But while scientists have come to understand more about the role of what Dr Etheridge describes as “a natural air purifier”, they still find it very difficult to measure — and such measurement is “fundamental to be able to predict the levels of gases that affect climate and the ozone layer into the future”, he said.

“Even if you can measure it directly in the atmosphere, one place and one time doesn’t give you a meaningful number, ’cos it’s so variable,” he continued. “So what tends to happen is, people use what we call integrating tracers. These are other gases which are removed by hydroxyl, and by knowing how much of those gases are being removed, you can infer the amount of hydroxyl.

“Those gases are longer lived, easier to measure and they give you more of an average concentration. Because hydroxyl’s got a lifetime of a second, whereas these other compounds have lifetimes of months or even years.”

The researchers were particularly interested in tracer molecules controlled by a chemical reaction with hydroxyl, such as carbon monoxide (CO) that’s been tagged by cosmic rays.

“Cosmic rays are constantly bombarding the atmosphere and produce small amounts of the isotope carbon-14 (14C),” Dr Etheridge said. “That gets oxidised to carbon monoxide, and then that carbon monoxide gets removed by hydroxyl. The advantage of that is, we know how it’s being produced, so we’ve got a source; and we know that it’s almost entirely removed by hydroxyl. What we don’t have is the concentration of that tracer.”

14C has been recognised as an ideal tracer of hydroxyl ever since the 1990s, explained Dr Etheridge, when a group of New Zealand scientists produced a paper on it. But while that gives us data on the last few decades, it doesn’t cover anything prior.

“The change in the atmosphere as we pushed out industrial gases, greenhouse gases and so on, since the 1800s, we don’t have an understanding of how vulnerable hydroxyl was to those extra emissions,” Dr Etheridge said. “As it’s mopping up and oxidising those gases in the atmosphere, what’s happening to it? Is it reducing in concentration, or is it actually able to keep up? That’s the main question we’re trying to answer.”

So how did Dr Etheridge’s quest to acquire 14C lead him and his fellow scientists, including co-leader Dr Vas Petrenko from the University of Rochester and field leader Sharon Labudda from the Australian Antarctic Division, to spend up to 12 weeks at Law Dome, Antarctica? According to Dr Etheridge himself, “It’s the only place we could do it on the planet.” 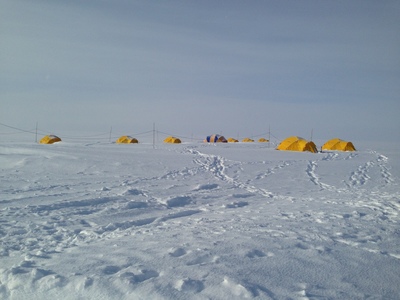 He explained that Antarctica is a clean, uncontaminated environment — one in which “bubbles of air” can be stored and preserved at depth in polar ice for hundreds of years. And while cosmic rays do produce a small amount of 14C in water molecules (including ice) as well in the atmosphere, the amount is only small, and Dr Etheridge and his team believe they can correct for it.

“If we go to a place where there’s a lot of snow falling, any parcel of snow containing air gets buried very quickly, and it gets exported below the surface where the contaminant 14C from cosmic rays would otherwise be produced,” Dr Etheridge said. And with the east side of Law Dome receiving around 4 m of snowfall per year, as well as being reasonably accessible through the Australian Antarctic Program, Dr Etheridge said it provided “almost perfect” conditions. 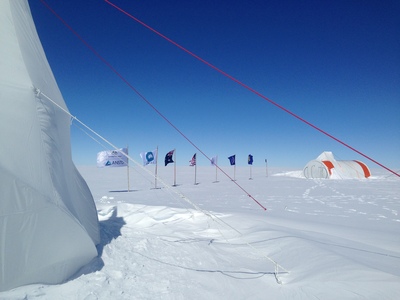 But while these samples containing bubbles of air are shielded while they’re under the snow, they become contaminated by further cosmic ray irradiation as soon as they’re drawn up, in the form of ice, to the surface. This meant the majority of ice sampled could not be brought back to Australia or the US — “the signal would be obliterated”, said Dr Etheridge. The solution? Melt the samples as soon as they come up — in a temporary lab erected on an Antarctic ice sheet, consisting of a series of tents. 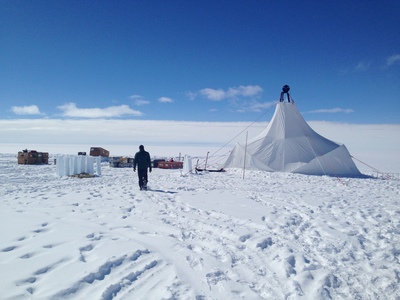 One of the ice drill tents. ©Sharon Labudda/Australian Antarctic Division

Using three drills run by collaborators from the US Ice Drilling Design and Operations (IDDO), the researchers drilled down through 250 m of ice, eventually reaching a depth representing Earth’s atmosphere in pre-industrial times. The ice cores were brought to the surface and, within a day, the air was extracted upon melting it in a large tank.

“The air would then pass away from that tank into our science tent, where it would be treated,” Dr Etheridge said. “It would be pumped into a canister and some would be measured for the basic greenhouse gases. Once the air was in the canister, the 14C production would stop.” 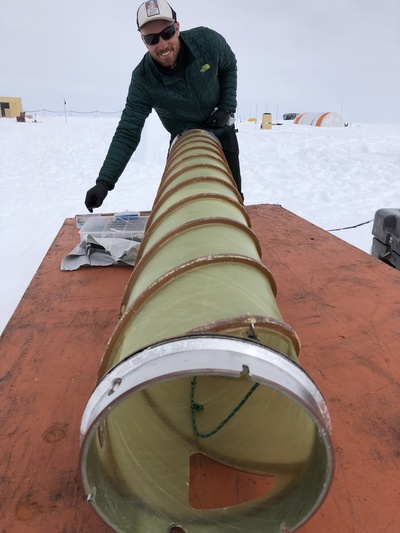 Grant Boeckmann from Ice Drilling Design and Operations (IDDO) with one of the ice drills. ©David Etheridge

It was a complicated set-up, to say the least — one which required giant sleds loaded with scientific equipment to be pulled by tractors from Casey to the drilling site. The lab also needed to be snowproofed — the disadvantage of setting up camp in a location where it’s always snowing — and the samples themselves could only be handled by scientists wearing cleansuits and gloves.

“This is probably the most complex thing we’ve done in the Australian Antarctic Program for ice core drilling,” Dr Etheridge admitted.

“The whole sampling activity had layers and layers of controls around it — the timing, the amount, the cleanliness and so on — and that’s because it’s a very challenging thing to do at all, but to do it in ice in the Antarctic is just adding another few layers of challenge.” 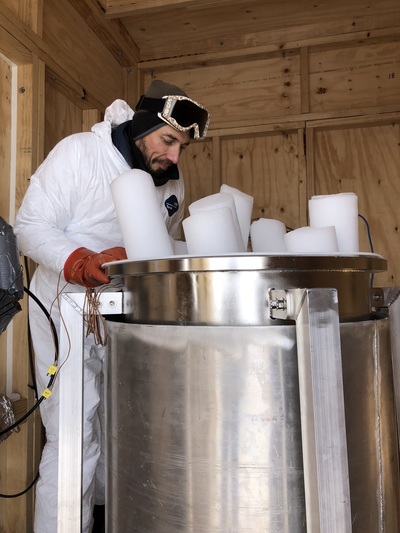 Now the samples have all been safely transported back to the Australian Antarctic Division’s headquarters in Hobart, but according to Dr Etheridge, the real analytical work is only just beginning. The air samples need to be contained in quite literally airtight tanks, while a few accompanying ice core samples are kept in freezers below -20°C. The air samples will soon be sent off to the University of Rochester — Dr Etheridge is hopeful that no curious customs officials see fit to open them en route — where scientists will extract the carbon monoxide and oxidise it, to produce carbon dioxide.

“That carbon dioxide is transferred into small tubes called break seals, which will then come back to Australia, to ANSTO in Sydney,” Dr Etheridge said. “That CO2 will be reduced to a small amount of graphite, in the order of 10 µg of carbon.”

Finally, these carbon samples will be measured by accelerator mass spectrometry in ANSTO’s Centre for Accelerator Science. This atom-counting technique is excruciatingly sensitive, enabling scientists to detect just one atom of 14C amongst 10,000,000,000,000,000 (1016) ‘normal’ carbon atoms. To put that into perspective, this is about the number of virus particles you would need to line up next to each other to circle the Earth’s equator.

“Once we’ve measured these samples across the past 140 years, and quantified the trend in the tracer that tells us how hydroxyl levels have changed over that period, we can start to provide data for earth systems models that simulate the chemistry and the physics of the atmosphere,” Dr Etheridge said. 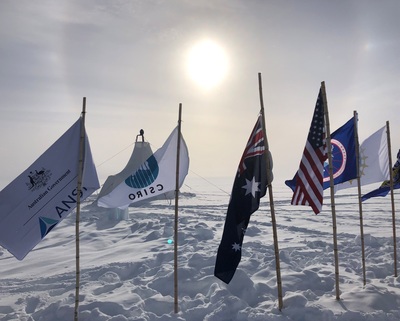 Collaborators on the project included the Australian Antarctic Division, ANSTO, CSIRO, the US National Science Foundation, the University of Rochester and Scripps Research. ©David Etheridge

It’s clearly a massive project — one that was four years in the making and, ironically, has not been without its own emissions along the way. But Dr Etheridge firmly believes it’s been worth it.

“We are aware of the footprint of the exercise … but we think that this is such a necessary piece of the future of the planet, to understand this, that it’s worthwhile,” he said.

“It’s a huge effort to look at what emissions reductions are required to meet a certain climate future — so let’s say a 1.5 or 2° Paris scenario. Emissions are one part of it, but we still need to know about the removal of those gases.

“For example, under a certain emissions scenario, what will be the amount of greenhouse gases or ozone-depleting gases that remain in the atmosphere? What damage will they do to the ozone layer? How much warming will they cause?

“Knowing how hydroxyl varies in the atmosphere is key to answering these questions.”

A new blood test can accurately detect more than 50 types of cancer and identify in which tissue...