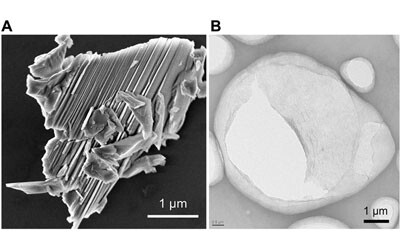 MOFs are a class of compounds consisting of metal ions that form a crystalline material with the largest surface area of any material known. They are so porous that they can fit the entire surface of a football field in a teaspoon, making it possible to store, separate, release or protect valuable commodities.

Researchers from Monash University and CSIRO have now set a record for carbon dioxide capture and storage (CCS) using a MOFs nanocomposite that can be regenerated with high speed and low energy cost. This enabled the sponge-like technology to capture carbon dioxide from a number of sources — even directly from air — using the same techniques as induction cooktops but with one-third of the energy of other reported methods.

“Existing commercial carbon capture technologies use amines like monoethanolamine, which is highly corrosive, energy intensive and captures a limited amount of carbon from the atmosphere,” said research co-leader Associate Professor Matthew Hill, from Monash and CSIRO.

“Our research shows the lowest reported regeneration energy calculated for any solid porous adsorbent, including monoethanolamine, piperazine and other amines. This makes it a cheap method that can be paired with renewable solar energy to capture excess carbon dioxide from the atmosphere.

“Essentially, we can capture CO2 from anywhere. Our current focus is for capture directly from the air in what are known as negative emissions technologies.”

For MOFs to be used in CCS applications, it is essential to have materials that can be easily fabricated with good stability and performance. The regeneration energy calculated for M-74 CPT@PTMSP is meanwhile the lowest reported for any solid porous adsorbent.

A separate MOFs study has meanwhile resulted in the creation of an ultrathin porous membrane to completely separate potentially harmful ions, such as lead and mercury, from water. This innovation could enhance the desalination process and transform the dirtiest water into something potable for millions of people across the world.

An international research team developed water-stable monolayer aluminium tetra-(4-carboxyphenyl) porphyrin frameworks (termed AI-MOFs) nanosheets and demonstrated their near perfection as building materials for membranes in ion separation from water. These Al-MOFs nanosheets, exfoliated to just 1 nm, can help remove harmful carcinogens from the atmosphere by creating highly porous membranes to facilitate the separation processes of gases and organic solvents, such as paint.

The study was led by Monash Professor Xiwang Zhang, Director of the ARC Research Hub for Energy-Efficient Separation, and Dr Qinfen Gu, Principal Scientist at ANSTO’s Australian Synchrotron. It has been published in the journal Science Advances.

“However, it remains a daunting challenge to fabricate ultrathin MOFs membranes (less than 100 nm) for water-related processing, since most reported MOFs membranes are typically thick and suffer from insufficient hydrolytic stability.

“In this world-first study, we were able to use these ultrathin Al-MOFs to create a membrane that is permeable to water while achieving maximum porosity with nearly 100% rejection of ions. This study shows promise for the future application of this membrane to other filtration processes, such as gas separation.”

The study suggests that polymers are by far the most widespread membrane materials, largely owing to their easy processability and low cost; however, traditional polymeric membranes for ion separation from water usually contain a dense selective layer, leading to limited selectivity. Nanoporous membranes, where uniform nanopores act as the sieving role, may overcome this limitation.

The study confirms that the intrinsic nanopores of Al-MOFs nanosheets facilitate the ion/water separation by creating vertically aligned channels as the main transport pathway for water molecules, and was enabled by the unique capability of the Australian Synchrotron to analyse materials at the molecular level.

“We use an instrument called the Powder Diffraction beamline at ANSTO’s Australian Synchrotron to understand the difference between the molecular structure of nanosheet samples and samples at different temperatures, in order to test water purification performance,” Dr Gu said.

“The technique, called in-situ, high-temperature powder X-ray diffraction characterisation, was conducted on the nanosheets, and during the process there were no obvious variations in the samples at increasing temperature, demonstrating their robustness.”

The LIGO and Virgo observatories have detected gravitational waves caused by the collision of a...