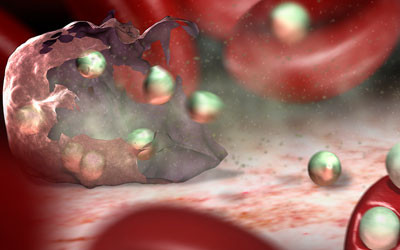 An international research team has developed a new diagnostic test to track the spread of infectious diseases such as malaria in populations and target resources where they are most needed.

The new diagnostic approach has the potential to enhance infectious diseases surveillance, and so is now being adapted to track immunity to COVID-19. Development of the technique was led by the Walter and Eliza Hall Institute (WEHI, Australia), the Pasteur Institute (France) and Ehime University (Japan), and has been described in the journal Nature Medicine.

Exposure to viruses, parasites or bacteria triggers immune responses that lead to antibodies circulating in the blood. These antibodies can remain for years, but over time the amount of different types of antibodies changes.

The new diagnostic technique allows researchers to look in detail at the amounts of different antibodies in the blood, to pinpoint whether — and when — a person has been exposed to a particular infection. That’s according to Professor Ivo Mueller, who led the research and has joint appointments at WEHI and the Pasteur Institute.

“Many tests for immunity give a simple ‘yes or no’ answer to whether someone has antibodies to the infectious agent,” he said. “In contrast, our test — which was initially developed to look at malaria infections — can pinpoint how long ago a person was exposed to an infection.

“This information is extremely valuable for tracking the spread of an infection in a population. Particularly in lower income countries it may not be possible to monitor the actual spread of the infection, but it is very helpful to look retrospectively at whether the infection has been spreading — and to monitor the effectiveness of infection control programs, and respond to disease resurgence.”

The technique was initially established to understand the spread of relapsing Plasmodium vivax malaria. The parasite causing this form of malaria — the most widespread malaria parasite in the world — can be carried in a dormant state by people and later reawaken to continue to disease spread, causing significant challenges for malaria control. 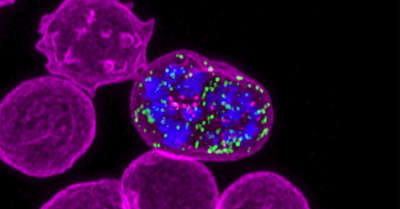 Malaria is caused by a parasite which infects red blood cells. In this image you can see red blood cells (purple), one of which contains malaria parasites (coloured specks). Image credit: Dr Michal Pasternak, Walter and Eliza Hall Institute.

WEHI researcher and joint lead author Dr Rhea Longley said the malaria blood test had been validated using samples contributed by people living in malaria-endemic regions of Brazil, Thailand and the Solomon Islands, noting, “Our investigations confirmed that the test could detect people who had been infected with P. vivax in the preceding nine months — and who would thus be at risk of recurring malaria infections.

“This information will enable better surveillance and deployment of resources to areas where malaria remains, and targeted treatment of infected individuals. This could be a huge improvement in how vivax malaria is controlled and eventually eliminated.”

Further development of the malaria blood test received a recent boost with funding from an NHMRC Development Grant, which commenced in 2020.

“We will be working with the Australian biotech company Axxin to develop a diagnostic test for malaria that can be deployed in the field, based on the immune markers our laboratory testing identified,” Prof Mueller said. “We plan to continue clinical trials investigating how our test can guide malaria elimination efforts, and having a rapid field test will be an important aspect of this.”

Prof Mueller added that his team is now applying the systems they have established for malaria to detect immunity to the coronavirus that causes COVID-19.

“We have already started to study the blood of people who have had COVID-19 infections to document the types of antibodies they carry. In the next six months we hope to have discovered how these antibodies change over time, meaning we can use this information to explore immunity in wider groups in the community.

“This is not a tool for diagnosing individual people, but rather for monitoring COVID-19 disease spread in populations. In countries in the Asia–Pacific, Africa or Latin America, it is possible that COVID-19 will be spreading undetected in some regions for the coming year — especially as governments try to loosen shutdown restrictions. This test could be invaluable for informing these decisions.

Top image: Malaria is caused by a parasite which reproduces within red blood cells before being spread by mosquitoes. Image credit: WEHI.TV Malaria animation/Walter and Eliza Hall Institute.

Blood tests based on the tau protein phospho-tau217 (p-tau217) may be able to detect changes in...

The LIGO and Virgo observatories have detected gravitational waves caused by the collision of a...