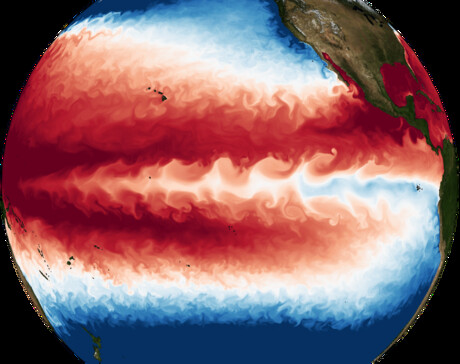 The cycling between warm El Niño and cold La Niña conditions in the eastern Pacific (commonly referred to as the El Niño-Southern Oscillation, ENSO) has persisted without major interruptions for at least the last 11,000 years. This may change in the future, according to a new study published in the journal Nature Climate Change by an international team of scientists.

Researchers from the IBS Center for Climate Physics (ICCP) at Pusan National University (South Korea), the Max Planck Institute of Meteorology (Germany) and the University of Hawaiʻi at Mānoa (USA) conducted a series of global climate model simulations with spatial resolution of 10 km in the ocean and 25 km in the atmosphere. Boosted by the power of one of South Korea’s fastest supercomputers, their ultrahigh-resolution climate model simulations can realistically simulate tropical cyclones in the atmosphere and tropical instability waves in the equatorial Pacific Ocean, which both play fundamental roles in the generation and termination of El Niño and La Niña events.

“Our supercomputer ran non-stop for over one year to complete a series of century-long simulations covering present-day climate and two different global warming levels,” said ICCP’s Dr Sun-Seon Lee, who conducted the experiments. “The model generated 2 quadrillion bytes of data; enough to fill up about 2000 hard disks.”

Analysing this enormous dataset, the team focused on a longstanding problem: how will ENSO change in response to increasing greenhouse gas concentrations? As noted by ICCP Director Professor Axel Timmermann, “Two generations of climate scientists have looked at this issue using climate models of varying complexity … What is common to these models is that their simulated temperatures in the equatorial Pacific, west of Galapagos, were always too cold compared to the observations. This prevented them from properly representing the delicate balance between positive and negative feedback processes that are important in the ENSO cycle.”

By capturing small-scale climatic processes at the highest computationally possible resolution, the team was able to alleviate these ocean temperature biases, leading to substantial improvements in the representations of ENSO and its response to global warming.

“The result from our computer simulations is clear: increasing CO2 concentrations will weaken the intensity of the ENSO temperature cycle,” said first author Dr Christian Wengel, currently based at the Max Planck Institute of Meteorology.

By tracing the movement of heat in the coupled atmosphere/ocean system, the scientists identified the main culprit of the collapse of the ENSO system: future El Niño events will lose heat to the atmosphere more quickly due to the evaporation of water vapour, which has the tendency to cool the ocean. In addition, the reduced future temperature difference between the eastern and western tropical Pacific will also inhibit the development of temperature extremes during the ENSO cycle.

However, these two factors are partly offset by a projected future weakening of tropical instability waves. Normally these oceanic waves, which can encompass up to 30% of the Earth’s entire circumference, develop during La Niña conditions. They replace colder equatorial waters with warmer off-equatorial water, thereby accelerating the demise of a La Niña event. The new computer simulations, which resolve the detailed structure of these waves, demonstrate that the associated negative feedback for ENSO will weaken in the future.

“There is a tug of war between positive and negative feedbacks in the ENSO system, which tips over to the negative side in a warmer climate,” said co-author Assistant Professor Malte Stuecker, from the University of Hawaiʻi at Mānoa. “This means future El Niño and La Niña events cannot develop their full amplitude anymore.”

Even though the year-to-year fluctuations in eastern equatorial Pacific temperatures are likely to weaken with human-induced warming according to the new study, the corresponding changes in El Niño and La Niña-related rainfall extremes will continue to increase due to an intensified hydrological cycle in a warmer climate, as shown in recent studies by scientists from the ICCP and their international collaborators.

“Our research documents that unabated warming is likely to silence the world’s most powerful natural climate swing which has been operating for thousands of years,” Prof Timmermann said. “We don’t yet know the ecological consequences of this potential no-analogue situation, but we are eager to find out.”