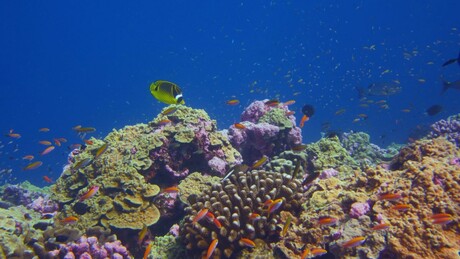 A research team led by the Woods Hole Oceanographic Institution (WHOI) has found that some coral communities are becoming more heat tolerant as ocean temperatures rise, offering hope for corals in a changing climate. Their work has been published in the journal Geophysical Research Letters.

Just like on land, heatwaves underwater are becoming more frequent and intense as the world warms, putting stress on ocean ecosystems. High temperatures hit coral reefs especially hard by causing widespread bleaching events, where corals eject the symbiotic algae in their tissues, further weakening the animals. With continued ocean warming, coral reefs face a dim future. Some corals, however, are more adept at managing heat stress than others.

In the new study, researchers used daily satellite data and temperature loggers to monitor coral communities at four islands within the Phoenix Islands Protected Area (PIPA), an area encompassing over 400,000 km2 of coral reef and deep-sea habitat in the central Pacific Ocean. The Republic of Kiribati established the reserve in 2008 and the United Nations Educational, Scientific and Cultural Organization (UNESCO) designated PIPA as a World Heritage Site in 2010.

“The protected area gives us a rare opportunity to study pristine and isolated coral reef ecosystems, a privilege for which we thank the people of Kiribati,” said study co-author Anne Cohen, a marine scientist at the WHOI.

After a 2002–2003 heatwave, the surveyed sites lost more than three-quarters of their coral cover. The reef was beginning to recover when another heatwave hit in 2009–2010, sparking fears of widespread bleaching, but two years later coral cover had increased by more than 5%. Following the ‘Super El Niño’ in 2015–2016, which raised ocean temperatures by 3°C, the loss of coral cover was 40% — about half of the 2002 losses, despite causing twice the level of thermal stress. The study authors have ruled out 11 environmental factors that might explain the higher-than-expected survival following the 2009–2010 and 2015–2016 heatwaves, such as greater cloud cover or more gradual warming.

“It’s easy to lose faith in coral reefs,” said first author Michael Fox, a postdoctoral scientist and coral reef ecologist at the WHOI. “But in PIPA, which is protected from local stressors, and where reefs have enough time to recover between heatwaves, the coral populations are doing better than expected.

At other reefs worldwide, sometimes only a handful of especially hardy or fast-growing species recover after a bleaching event. Coral larvae can float long distances on ocean currents, but due to PIPA’s isolation, the researchers hypothesise that heat-tolerant offspring from the surviving corals are repopulating the reefs, allowing the community to keep pace with warming seas — at least for the time being.

“We’re seeing areas that were devoid of corals after 2002–2003 that are now flourishing with most of the original species,” Fox said.

The study could help coral reef managers identify coral communities most likely to survive in the warming ocean, with the team’s next step being to figure out how they are doing it. And they are not the only ones embarking on such an endeavour, with a separate research team recently revealing how thermally tolerant corals have different mechanisms for responding to heat stress — and how identifying and researching these different heat stress response patterns will help to protect the world’s reefs.

In order to elucidate the factors that contribute to higher thermal tolerance in corals, Professor Christian Voolstra from the University of Konstanz and colleagues introduced a new mobile testing system last year — the Coral Bleaching Automated Stress System (CBASS). The system makes it possible to quickly identify corals that are particularly resilient.

“It allows researchers and conservationists alike to assess coral resilience anywhere on Earth and to find out how endangered each coral reef is, without the need for costly and sophisticated tech,” Prof Voolstra said.

In order to investigate this possibility, the research team conducted molecular analyses to elucidate mechanisms of thermal tolerance in corals from the different locations. Genetic examinations showed that smooth cauliflower corals from the Gulf of Aqaba respond to heat stress with a strongly altered gene expression — for example, the increased production of certain proteins. Parallel to this, the composition of the coral-associated bacterial communities changed. By comparison, corals from the central part of the Red Sea did not exhibit any of these changes when exposed to heat stress.

The molecular results, published in the journal Molecular Ecology, support the idea that smooth cauliflower corals have different thermal tolerance mechanisms. According to Prof Voolstra, “We interpret the response of the corals from the Gulf of Aqaba as that of a ‘resilient’ population that directly and proportionally reacts to increases in temperature. By contrast, the more static expression of genes of the corals from the central part of the Red Sea indicates a fixed reaction norm, irrespective of the heat stress applied, which provides ‘resistance’ to high water temperatures, but at the cost of the ability to flexibly respond to further increases in temperatures.”

At the moment, it is unclear which of these tolerance mechanisms protects corals better from the global increase in ocean temperatures caused by climate change. The fact that ‘resilient’ and ‘resistant’ tolerance mechanisms can be distinguished using molecular methods could be of great importance for the conservation prioritisation of existing coral reefs or for restoration approaches that could use heat-tolerant corals for sexual propagation. For this reason, the research team is making plans to employ the methodological approach used successfully in the Red Sea study around the world.

“Our study shows the tremendous value of an integrative, combined approach: using the CBASS system for the standardised identification of thermal tolerance in corals with subsequent follow-up molecular analyses to identify the underlying tolerance mechanisms and marker genes,” Prof Voolstra said.