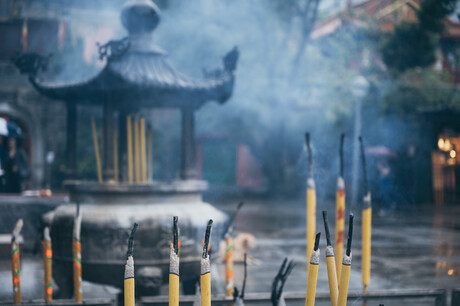 Researchers from Hong Kong’s Lingnan University (LU) have found that concentrations of fine particulate matter (PM2.5) from incense burning both inside and outside temples could be at least four times more than the recommended levels. The more temples there are in the same district, the higher the respiratory mortality rate.

Over 70% of registered Chinese temples in Hong Kong are in urban areas close to residential and commercial districts, and air pollution from burning incense may have a negative impact on the local communities. Last year, the LU research team examined 366 temples in Hong Kong, classifying them according to their geographical characteristics and installing data-collecting logging devices in those with a heavier pedestrian flow.

The team analysed respiratory mortality rates in 2001, 2006, 2011 and 2016 released by the HKSAR Government, comparing relationships between them and distribution of temples, the temple index and other environmental factors including building density, greenery density and water density. The results suggest that incense burning in temples is a main factor in air pollution, and the more temples located in the same district, the higher the reported rate of respiratory mortality.

Air samples were also collected from five temples with heavy pedestrian traffic in the Kowloon West and Kowloon East districts through air monitoring instruments installed at the main entrances and inside and outside the temples to monitor the 24-hour average concentration of PM2.5 in the air. It was found that during peak periods, the PM2.5 concentration levels both indoors and at the main entrances of most temples exceeded the recommended standards suggested by the HKSAR Government (75 μg/m3) and the World Health Organization (WHO; 25 μg/m3). The readings gathered inside one of the sampled temples during peak periods stood at 466 μg/m3, which was six times and 18 times more than the two standards respectively; while another temple’s front entrance reading was 299 μg/m3 — four times and 12 times more than the recommended standards. 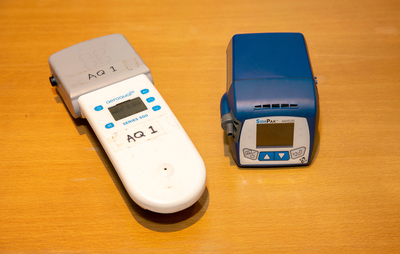 Air monitoring instruments installed at temples to monitor the 24-hour average concentration of PM2.5 in the air.

Project leader Professor Paulina Wong Pui-yun said that incense burning in temples has been largely neglected by the public and is not included in the measurement of air quality index.

“There has been little change in the number of temples over the last century, but their surrounding environment is ever changing; some temples are right next to residential buildings,” she noted. “This had a significant environmental impact, and our results suggest that incense burning may cause long-term air pollution contributing to respiratory diseases and should not be overlooked.”

Prof Wong added that Hong Kong temples are classified as open, semi-closed and closed according to their incense burning characteristics, and suggested that the government issue new guidelines for urban planning regarding the building separation distances and air ventilation requirements of different types of temples. In addition, the frequency of incense burning in open and semi-closed temples in proximity to residential areas should be regulated, or performed on specified dates and times. As in other Southeast Asia countries, temples should install automatic mist sprayers to reduce smoke dispersion, as well as using incense made with non-toxic substances to minimise health risks to worshippers and neighbours, she said. Residents nearby should close all windows facing the temple during incense burning, clean air-conditioner filters regularly and consider using air purifiers to improve the air quality of their home.

The news comes at a time when the effects of air pollution are arguably being taken more seriously, with another recent study, published in the Journal of the Association of Environmental and Resource Economists, looking at the causal relationship between outdoor air pollution levels on nationwide university entry examination day and students’ cognitive performance in Brazil.

The study authors used Brazilian data on concentrations of ozone (O3) and particulate matter (PM10) and a dataset of students’ scores to examine the impact of air pollution on academic performance in national examinations. The air pollution data focuses on Rio de Janeiro and São Paulo — Brazil’s most industrialised states — using air pollution and weather monitoring station data to build a unique data panel from 2015–17.

The authors constructed individual-level panel data for the two days of exams across three years and applied student fixed effects to address potential endogeneity concerns. “In addition,” they wrote, “we take advantage of plausibly exogenous spatial and temporal variation in PM10 across municipalities in the states of Rio de Janeiro and São Paulo and utilize an instrumental variable approach based on wind direction.”

The team’s findings suggest that an increase of 10 mg/m3 of PM10 on the day of the examination decreases students’ scores by 6.1 points (8% SD). They wrote, “Even when including a more flexible measure of our treatment that is utilizing a dummy variable to account for the days in which PM10 exceeded the WHO’s acceptable threshold, our findings still point to negative effects of air pollution on cognitive performance during examinations.” Placebo tests, sensitivity checks and falsifications tests reinforced the main findings: evidence of a link between air pollution and exam performance.

Consistent with previous studies, the authors found evidence that the effect of air pollution on exam performance appears to affect males more adversely than females. Their results also suggested that poorer students may be more susceptible to air pollution than their counterparts.

“Our findings provide plausible evidence to suggest that cognitive performance may be hindered by poor air quality, but unequally so,” the researchers concluded.