The mystery of organic matter in lunar samples 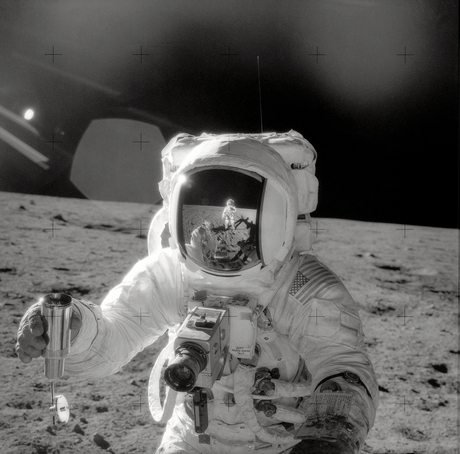 Scientists have solved a mystery that has plagued NASA since the Apollo missions to the moon — the fact that samples of lunar soil brought back to Earth contained low levels of organic matter in the form of amino acids.

Certain amino acids are the building blocks of proteins — essential molecules used by life to build structures like hair and skin and to regulate chemical reactions. But since the lunar surface is completely inhospitable for known forms of life, scientists don’t believe the organic matter came from life on the moon. Instead, they think the amino acids originate from four possible sources:

“People knew amino acids were in the lunar samples, but they didn’t know where they came from,” said Jamie Elsila of NASA’s Goddard Space Flight Center in Maryland. “The scientists in the 1970s knew the right questions to ask and they tried pretty hard to answer them, but they were limited by the analytical capabilities of the time.”

In a study published in the journal Geochimica et Cosmochimica Acta, NASA-funded scientists analysed seven samples taken during the Apollo missions and stored in a NASA curation facility since their return to Earth, all of which contained low concentrations (105 to 1910 ppb) of amino acids. At the Goddard Astrobiology Analytical Laboratory, they utilised instrumentation with high enough sensitivity to determine the isotopic composition of an amino acid molecule. This capability enabled the team to say terrestrial contamination was the primary source of the lunar amino acids.

Isotopes are versions of an element; for example, Carbon-13 is a more massive version of the common Carbon-12. Life prefers to use the lighter Carbon-12, which reacts a bit more readily, so amino acid molecules from terrestrial life will have less Carbon-13 compared to amino acids produced by non-biological reactions in asteroids. This is what the team found in one of the lunar samples.

The isotopic composition of the amino acids (glycine, β-alanine and L-alanine) had less Carbon-13 and more closely resembled that from terrestrial sources than that from meteorites. That said, the team also found some amino acids that are extremely rare in terrestrial biology but common in meteorites (eg, Alpha-aminoisobutyric acid). This discovery suggests meteorites may make a small contribution to the amino acids found on the lunar surface, according to Elsila.

Isotopic composition helped rule out solar wind as the source, since solar wind has far less Carbon-13 than what was found in the sample. Also, if solar wind were responsible for the amino acids, then samples taken from near the lunar surface (which had the highest exposure to the solar wind) should have had the greatest abundance of amino acids — but this was not the case.

The ability to determine the orientation of an amino acid molecule provided another key clue, according to Elsila. Amino acid molecules can be built in two versions — left and right — that are mirror images of each other, like hands. Terrestrial life uses the left-handed versions, while non-biological chemistry produces the left- and right-handed varieties in equal amounts. In the samples, the team found that the left-handed versions were far more common than right-handed ones for several types of amino acids used to make proteins. This suggests terrestrial life as the source of these amino acids.

The research has important implications for future missions that are looking for extraterrestrial organic matter that may be present, but in very small (trace) amounts. The researchers stated, “This work highlights the fact that even with thoughtful and careful contamination control efforts, trace organics in extraterrestrial samples can be overwhelmed by terrestrial sources.

“Future missions emphasising organic analysis must consider not only contamination control but also include ‘witness samples’ that record the environment and potential contamination as the mission is built and launched to understand the unavoidable contamination background.”